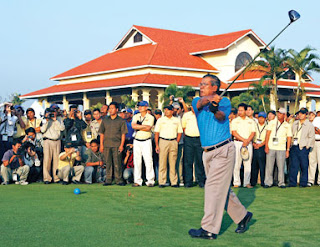 Photo by: Photo Supplied
Prime Minister Hun Sen tees off during the opening ceremony for the inaugural edition of the Johnnie Walker Cambodian Open in 2007 at the Phokeethra Country Club in Siem Reap.
via CAAI
Thursday, 09 December 2010 15:00 H S Manjunath
Past winners of the Johnnie Walker Cambodian Open all share a common thought that the second-to-last ranking event on the Asian Tour calendar, which tees off at the Phokheetra Country Club in Siem Reap today, could well be one of the toughest and the most exacting tournaments of the year.
Defending champion Marcus Both of Australia is now sitting in 24th in the Tour Order of Merit list after last week’s Hero Honda Indian Open in which he finished in fifth place, his best finish of the year.
Meanwhile, 2008 winner Thongchai Jaidee of Thailand is aiming for a record 13th Tour win after a relatively barren season, while inaugural edition winner Byran Saltus of the United States is coming back from a long spell away from the tour. All golfers feel that form and experience run deeper than in previous years, and success in the event will demand absolute focus and finesse.
This is Marcus Both’s fourth trip to the Kingdom, and his love for the place and the people has only grown. He produced a spectacular run in last year from way off the pace to land the title, and the moment still lives with him.
“Last year was a special moment for me,” he told The Post yesterday. “It was a thrill to win starting the final round from so far back, and it happened on my Mum’s birthday. My form last month has been quite good. I am working extremely hard on my game and it is beginning to show results – I finished tied fifth in the Indian Open.
“There were areas that let me down, but I am confident going in and looking for a big finish.”
As one of the most accomplished and decorated players from the region, Thongchai is a strongly touted front runner. In a remarkable career, the 41-year-old former paratrooper in the Thai army has amassed nearly US$4 million in prize money on the Asian Tour, and is currently ranked eighth on the Order of Merit for 2010.
The Thai maestro broke into the world top 50 last year and has an inherent knack of doing the right things at the right time, as mirrored by his imposing record of making all but three cuts in 30 appearances worldwide.
Colourful Californian Bryan Saltus is excited to be back at Phokeethra Country Club, the venue for his only tour victory in 2007. “There are more pictures of me here than in my mum’s house,” he said at the clubhouse yesterday.
Form and standing wise, Saltus is not the same golfing force he was when he took the Open by storm, which saw him sign off his triumph with a leap into a lake by the 18th hole after the final putt. He has been off a golf course for 10 months this year after he lost his tournament card, spending six months in California, three in Vietnam and a month in Bali. Two weeks ago he returned to the Siem Reap course in an event, but admits he is probably too far down the line to mount a sturdy challenge against the elite field.
“The scramble for year end rankings will fire up lot of these guys,” said Saltus, who is toying with the idea of shifting his home to Asia.
Siddikur, the first professional golfer to emerge from Bangladesh, is among the leading bunch determined to put up a stout performance. His fifth ranking on the Order of Merit is indicative of his consistency, and this year’s Brunei Open victory signalled his first triumph on the tour.
Juvic Pagunsan of the Phillipines is regarded as a worthy floater on the tour, though his big moment was as far back as 2007 when he won the Pertamina Indonesia President Invitational. Pagunsan’s form has been well sustained through the year in smaller pro events in Malaysia, Thailand and the Phillipines.
The field is also full of predators who could upset the applecart of many of the fancied golfers. Thai challenger Thaworn Wiratchant is capable of a big show on his day and is regarded as a “dark horse”.
But as the time tested golfing wisdom goes, nothing but the best card counts, and this assembly of hard-nosed professionals are well aware that victory goes to the one who does his best over the four days.
Some interesting insights into how the course plays calls for aggression on all par-5 holes and moderation on par-4s, which are among the trickiest. Holes 3 and 5 are par-3s, with the average strokes based on statistics recorded for the two holes being over par. Holes 15, 16, 17 and 18 form the Phokeethra Corner, a crucial test for any golfer.
A long roll of VIP invitees have been enlisted for both the opening and closing ceremonies for what is arguably the Kingdom’s most lucrative sporting competiton.
Posted by CAAI News Media at 11:28 pm