Cambodia, Thailand take one match each 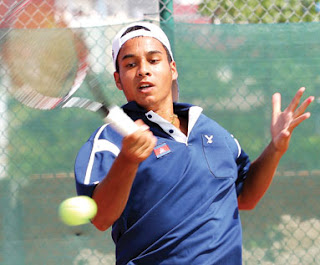 Photo by: Sreng Meng Srun
Bun Kenny makes a shot during his match yesterday against Benjamas Pongsatorn in the Tep Khunnah Memorial tournament.
via CAAI
Thursday, 09 December 2010 15:00 H S Manjunath
It was not that Thailand youngster Benjamas Pongsatorn fared badly, it was just that Cambodia’s Bunny Kenny was far too aggressive and assured on his ground strokes.
The national tennis team No 1 made a sweeping start in the Super Singles of the Tep Khunnah Memorial tourney by beating his Thai rival 6-0,6-0 in the three player Group A at the National Training Centre yesterday.
But as if to avenge his compatriot’s loss, Timo Sivapruksa pulled one back for Thailand when he downed Cambodian team member Orn Sambath 6-1, 7-5 in group B.
Serving with spot-on precision and making numerous useful advances to the net, the Thai player took the first set with some ease. Though Orn Sambath staged a brief rally in the second, Timo Sivapruksa had all the risky areas well covered to seal victory.
Posted by CAAI News Media at 11:25 pm