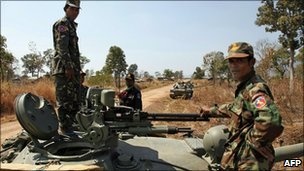 Cambodian troops near the temple. The two sides blame each other for breaking the truce
Cambodia says a disputed 11th Century temple - a UN World Heritage site - has been damaged during continued cross-border clashes with Thai troops.
Part of Preah Vihear temple collapsed after a Thai bombardment, officials said. Thailand has not commented.
The fighting has claimed five lives since Friday and thousands of villagers have been evacuated
There has been increased tension in the region since Cambodia won World Heritage status for the temple in 2008.
An international court ruling in 1962 said that the temple belonged to Cambodia although its main entrance is in Thailand and the surrounding area is claimed by both sides.
"A wing of our Preah Vihear temple has collapsed as a direct result of the Thai artillery bombardment," said the Cambodian military commander, in a statement.
The most recent tension was sparked this month when a Cambodian court sentenced two members of a Thai nationalist movement to up to eight years in prison after finding them guilty of espionage.
The two were among seven Thai politicians and activists charged with illegal entry after crossing into the disputed border area in December.
BBC South East Asia correspondent Rachel Harvey says Thai nationalist groups have been staging demonstrations to demand the government take a tougher line with Cambodia.
Who fired first?
Sunday's flare-up reportedly involved mortar, rocket and artillery fire and began at about 1835 local time (1135 GMT).
Fighting has continued despite at least two ceasefires. The two sides have blamed each other for breaking those ceasefires.
A Cambodian military commander told AFP news agency: "We are fighting now, they started firing at us first."
But the agency also quoted Thai Col Sunsern Kaewkumnerd as saying: "Thailand has retaliated. The fighting is still going on. There are no reports of casualties."
In his weekly television address, Thai PM Abhisit Vejjajiva said the army and government officials from both countries were working "to normalise the situation".
Posted by CAAI News Media at 7:38 am