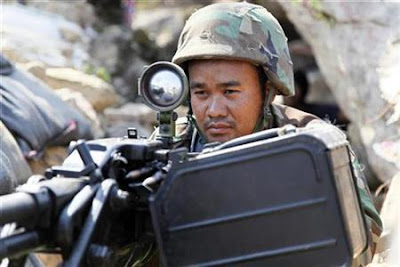 via CAAI
By Jason Szep and Ambika Ahuja
BANGKOK | Sun Feb 6, 2011 12:10pm EST
BANGKOK (Reuters) - Thai and Cambodian soldiers fought with rockets, guns and tanks on Sunday in a third day of clashes over disputed territory surrounding a 900-year-old Hindu temple, the area's worst fighting in years.
Tracer bullets cut through the dark and shelling could be heard from a 4.6-sq-km (two-sq-mile) contested area around the 11th-century Preah Vihear temple on a jungle-clad escarpment claimed by both Southeast Asian neighbors, witnesses said.
The heaviest fighting subsided after about three hours but sporadic gunfire was heard into the night. A Kantaralak district hospital in Thailand's Sri Sa Ket province said 10 soldiers and two villagers were wounded.
At least 2,500 people fled villages on the Thai side of the border and hundreds of Cambodians were evacuated, as Thailand brought in more troops and armored vehicles, according to witnesses and local authorities in both countries.
"At this point, the ceasefire has not been achieved. We are negotiating on all levels but meanwhile we have to respond and defend ourselves," said Thai army spokesman Colonel Sansern Kaewkamnerd, accusing Cambodian troops of firing first.
Fighting on Friday and Saturday in the area killed at least five people, the deadliest since Cambodia's bid in 2008 to list the ruins as a World Heritage Site sparked a series of sporadic and deadly exchanges of fire in the area.
In Phnom Penh, pro-government broadcaster Bayon TV said Thai Prime Minister Abhisit Vejjajiva was "hungry for war."
Although sporadic clashes are not unusual, it is rare for the two sides to fight over consecutive days.
The United States has called on both countries to show restraint. The Association of South East Asian Nations, a regional forum of which both Thailand and Cambodia are members, said on Saturday the deteriorating situation was undermining confidence in the region and would affect its economic recovery.
THAIS PROTEST
Thai army officials said Cambodia used small arms fire. heavy artillery and BM21 multiple rocket-launchers in the area, and that Thailand was responding with similar weapons.
On Saturday, Thai and Cambodian troops fought for about 25 minutes in a clash that killed one Thai soldier, before reaching a truce and agreeing not to reinforce troops.
That followed an intense two-hour clash in which three Cambodians, including two soldiers, and a Thai villager were killed on Friday, the first fatalities in the militarized area since a Thai soldier was shot dead on January 31, 2010.
The fighting is the latest episode in on-again off-again tension between the neighbors.
Relations with Cambodia have become a bone of contention in long-running hostility between Thai political factions. Pro-establishment Thai "yellow shirt" activists have accused their main rival, ousted former populist premier Thaksin Shinawatra, of colluding with Cambodia to Thailand's detriment.
The yellow shirts are demanding Abhisit take a tougher line against Cambodia. Up to 4,000 gathered outside his offices on Saturday and 1,500 on Sunday calling for his resignation.
The Thai Foreign Ministry has accused Cambodia of violating Thai sovereignty and Cambodia has accused Thailand of invasion and filed a complaint with the U.N. Security Council.
The temple, known as Preah Vihear in Cambodia and Khao Phra Viharn in Thailand, sits on land that forms a natural border and has been a source of tension for generations.
The International Court of Justice awarded it to Cambodia in 1962 but the ruling did not determine the ownership of the scrub next to the ruins, leaving considerable scope for disagreement.
(Additional reporting by Prak Chan Thul in Phnom Penh and Viparat Jantrapapaweth in Bangkok; Editing by Jon Hemming)
Posted by CAAI News Media at 8:12 am