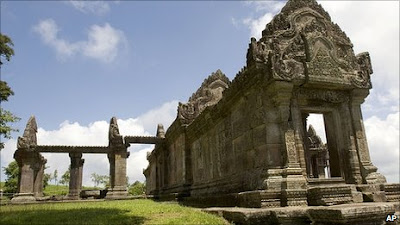 
6 February 2011
Fighting has again broken out along the border between Cambodia and Thailand in an area close to the Preah Vihear temple - a UN World Heritage site. The 11th Century Hindu temple belongs to Cambodia under a 1962 international court ruling that is disputed by many Thais.
The Preah Vihear temple has been at the centre of a border dispute between Thailand and Cambodia for more than a century.
The temple was built mainly in the 11th and 12th centuries, when the Khmer empire was at its height. Its construction was ordered by the kings who commissioned Cambodia's most famous temple at Angkor.
Maps drawn by Cambodia's French colonial rulers and Thailand - or Siam as it was then known - showed the temple as belonging to Cambodia, but in later decades Thailand said the maps were not official and were therefore invalid.
In 1962 the International Court of Justice granted the temple to Cambodia, but Thailand claimed much of the surrounding land, leaving Cambodia's only access to the temple up a steep hillside.
But the territorial row with Thailand lingered on, and in 2001 Thai troops blocked access for more than a year in a dispute about polluted water at the site.
Tensions increased in July 2008, after Cambodia's successful bid to have the temple listed as a Unesco World Heritage site.
In April 2009, troops from both sides exchanged fire across the disputed border. Thai authorities said at least two Thai soldiers died and seven were wounded.
Tensions flared again in February 2011 when a Cambodian court sentenced two members of a Thai nationalist movement to up to eight years in prison after finding them guilty of espionage.
The two were among seven Thai politicians and activists charged with illegal entry after crossing into the disputed border area in December.
Thai nationalist groups then staged demonstrations in Bangkok demanding the government take a tougher line with Cambodia.
Fighting eventually broke out along the border and thousands of villagers were evacuated from the area surrounding the temple.
Posted by CAAI News Media at 8:05 am