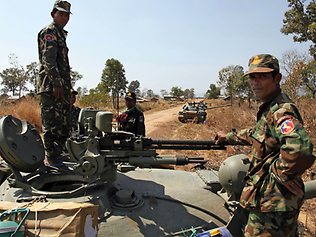 CAMBODIAN Prime Minister Hun Sen has urged the United Nations to help "stop the invasion by Thailand", according to a television statement.
A third round of border clashes between Thai and Cambodian troops in as many days has damaged a disputed 11th-century temple, the Cambodian government said.
The latest violence brings an end to a ceasefire put in place after earlier fighting left at least five people dead.
Both sides have accused the other of starting the clashes.
In a request to the current president of the UN Security Council, Sen said, "Please call an urgent meeting of the Security Council in order to stop the invasion by Thailand."
"We are fighting now, they started firing at us first," a Cambodian military commander said, referring to Thai troops across the border.
Thai army spokesman Colonel Sunsern Kaewkumnerd confirmed the renewed unrest, but accused the Cambodian side of reigniting the violence by firing "fireworks" and shooting.
Start of sidebar. Skip to end of sidebar.
.End of sidebar. Return to start of sidebar.
"Thailand has retaliated. The fighting is still going on. There are no reports of casualties," he said.
The latest unrest erupted a day after the neighbours agreed on a ceasefire to end heavy fighting around the 11th-century Preah Vihear temple.
Both sides claim the temple, which observers say is being used as a rallying point to stir nationalist sentiment in both Thailand and Cambodia.
The clashes came despite reassurances from Thailand and Cambodia earlier on Sunday that they were working to defuse border tensions.
Thai premier Abhisit Vejjajiva, who has faced pressure from the powerful "Yellow Shirts" at home for his handling of the issue, had said the "army and foreign ministries from both countries are working to normalise the situation".
A Cambodian military commander stationed at Preah Vihear said the Thai and Cambodian armies had held talks to improve the situation, though he cautioned that the atmosphere remained "tense" and both sides were "still on alert".
Ties between the neighbours have been strained since the temple was granted UN World Heritage status in July 2008.
The World Court ruled in 1962 that Preah Vihear itself belonged to Cambodia, although its main entrance lies in Thailand and the 4.6-square-kilometre area around the temple is claimed by both sides.
The neighbours traded heavy weapons fire in an area around the temple on Friday and each said the other had deployed mortars, rockets and artillery.
Cambodia said two of its soldiers and one civilian were killed in Friday's fighting, while Thailand said a villager on its side of the border also died.
A Thai soldier was killed in a brief resumption of hostilities on Saturday morning.
The media in both countries have suggested the toll could be much higher, however, with Thai newspapers suggesting 64 Cambodian soldiers were killed. Across the border, it was reported that at least 30 Thai troops had died.
Thousands of people fled their homes as villages were evacuated on both sides of the frontier when the fighting erupted.
But Somsak Suwansujarit, the governor of the Thai border province Sri Sa Ket, said people had started to return to their houses, thinking the situation had improved.
Tensions have flared in recent weeks in the wake of the arrest of seven Thai nationals for illegal entry into Cambodia in late December.
Two of them were sentenced to lengthy jail terms for spying, in a case that has caused outrage among the nationalist "Yellow Shirts".
Around 5000 "Yellow Shirts", a force to be reckoned with in Thailand's colour-coded politics, gathered outside the government compound in Bangkok on Saturday calling for the prime minister's resignation over the issue.
It has been suggested that the Association of Southeast Asian Nations (ASEAN) could move to mediate in the row and sources in the Cambodian foreign ministry have said ASEAN chair and Indonesian Foreign Minister Marty Natalegawa will visit the country on Monday.
But the subject of the meeting is unknown and Abhisit on Sunday dismissed ASEAN intervention as "unnecessary".
Posted by CAAI News Media at 7:42 am