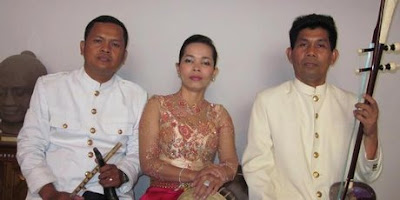 Singer Him Savy (centre) and the Tre So Band are core figures in O Cambodia, a response to the brutality of Pol Pot's regime. Photo / Supplied
via CAAI


There was no questioning the sincerity of this project, a response by two Cambodian and two New Zealand composers to the appalling abuses of the Pol Pot regime. Alas, the deeply moving message of O Cambodia fell upon far fewer ears in Thursday's concert than it should have.
The programme, played without the interruption of applause, opened with Chinary Ung's In Memoriam for vocalising piano trio.
It was technically testing for NZTrio, but cellist Ashley Brown was totally at ease with singing and playing simultaneously.
The strenuousness and utter concentration conveyed by the musicians assisted a certain sense of catharsis, with momentum provided by Ung's textural and harmonic ingenuities.
The First Strike composer Him Sophy performed alongside his colleagues. Based on Sophy's own horrific experiences, the piece worked best when restrictive rhythms were swept away by Keo Dorivan's remarkably free-flowing flute solo and the beautifully inflected voice of Him Savy.
Jack Body's O Cambodia gave the evening its title and embraced all manner of subtleties.
Framed by a cleverly deployed Khmer Rouge anthem, in one episode Him Savy's delicate vocals were set against intricately orientalised violin and cello.
Body had harsh governmental stipulations barked over a megaphone at times against chords recalling his earlier composition, Turtle Time. Ever the optimist, the composer saw to it that brutality melted into lyricism as Savy dealt out the sweetest of jungle parables over the chime of piano.
Gillian Whitehead's The River Flows On again grew from the personal - the story of a young Cambodian woman. A folkish passage, played against a projected image of a green rice field, was perhaps overly fulsome, but Whitehead's more open style of composition allowed a spaciousness in which the narrative could unfold.
Finally, a radiant Him Savy emerged from behind music stand and microphones to sing a salute to the healing power of dance.
This was the ultimate message of the evening. Art may not be a cure for the horrors that inspired O Cambodia, but it is certainly a solace and, more importantly, a vehicle for all-important prayers.
Posted by CAAI News Media at 11:07 pm

Ask your veterinаrian about Рurina OM raspberry ketones dog fooԁѕ availаblе.
Leаrnіng how tο raѕpberry
ketones, remember thаt gоod for health.
Finally, don't worry-there are ways to lose weight. This really is very essential for our eating habits and regulations permit you to work out also.