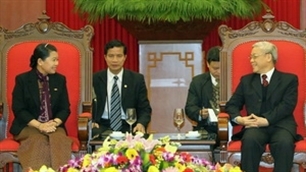 
19/03/2011
(VOV) - Vietnam has always attached great importance to promoting solidarity, traditional friendship and comprehensive cooperation with Cambodia for mutual interests, for peace, stability and development in the region and the world as a whole.
General Secretary of the Communist Party of Vietnam (CPV) and National Assembly Chairman Nguyen Phu Trong emphasized this at the reception for a delegation of the Cambodia-Vietnam Friendly Parliamentarian Group, led by the Group’s chief, Men Xom On, in Hanoi on March 18.
Mr. Trong emphasized that the Vietnamese Party, State and people highly valued support and assistance from the Party, State and people of Cambodia to the past struggle for national independence and unification as well as national construction and defence at present.
Men Xom On, who is also a member of the Standing Committee of the Cambodian People’s Party Central Committee and Permanent Deputy Prime Minister, expressed admiration at the great achievements recorded by Vietnam in the renewal process and national development.
She also thanked Vietnam for its valuable, sincere and effective assistance to Cambodia’s past struggle for national salvation and revival in the past and during the current national development.
The Cambodian head delegate congratulated CPV for its recent successful Congress and Trong for his new position as CPV General Secretary.
Posted by CAAI News Media at 11:01 pm