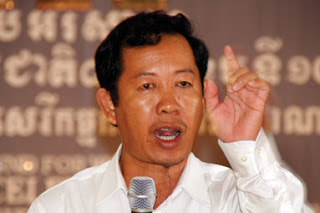 
via CAAI
Friday, 18 March 2011 15:02Phak Seangly
The Cambodian Independent Teachers’ Association yesterday released a letter written by three retired teachers from Prey Veng province’s Ba Phnom district, asking the Ministry of Social Affairs, Veterans and Youth Rehabilitation to intervene after they did not receive their retirement pensions.
The letter, dated February 28, states that since retiring last year, the teachers have not received a monthly pension they were entitled to for 14 months after retirement.
Chea Moeun, one of the teachers who penned the letter, said yesterday that he retired on January 1 last year and had never received his pension.
“Without the salary, my standard of living is difficult because I just do small farming,” said Chea Moeun.
CITA president Rong Chhun said that the Social Affairs Ministry does not usually give the pensions on time.
“There are many retired teachers who have not gotten their pension,” said Rong Chhun.
“It is involved with corruption because the relevant officials benefit from the retirement pension, like lending it to get interest.”
Him Sophal, director of the provincial education department, said that after receiving their last salary from the Ministry of Education, Youth and Sports, retired teachers come under the Social Affairs Ministry.
“It takes time to transfer documents from official teachers to retired officials, so the retirement pension is late,” said Him Sophal.
He added that about 200 state teachers went into retirement each year.
An official from the Social Affairs Ministry who declined to be named, said that sometimes there is “no money package” for the newly retired teachers because they are not listed under prakas, or edicts.
“The money package is made only once a year, but do not worry, the retirement pension is not lost,” he said.
“Some retired teachers do not get their pension for 20 months.”
Thon Tha, director of the provincial social affairs department, said that teachers who retired last year had not gotten the pension yet because his department had not received official edict authorising payment.
Mut Khev, secretary of state at the Social Affairs Ministry in charge of retirement pensions for civil officials, said that retired officials who had not received the pension should contact him or file a complaint to his ministry.
Posted by CAAI News Media at 10:28 am