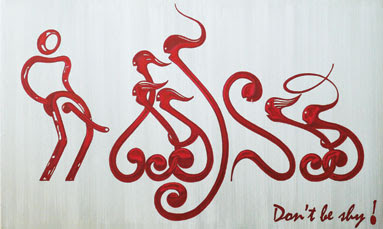 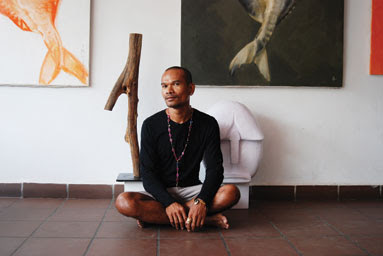 
via CAAI
Tuesday, 10 May 2011 15:00Roth Meas
GAY pride is the theme of an exhibition by Cambodian and foreign artists opening tonight at Meta House in Phnom Penh as part of LGBT Pride week in the Kingdom.
The multimedia Proud Out Loud exhibition addresses issues of sexuality in the lesbian, gay, bisexual and transgender communities.
Among Cambodia’s well-known creative types seizing the chance to support equal rights in the show is sculptor and artist Em Riem, a graduate of the Royal University of Fine Arts in Phnom Penh, Saint Etienne Arts School in France and the National School of Decorative Arts in Paris.
He has contributed two sculptures, one of a woman’s body and the other of a human head, for the show.
“My human head, one among my two sculptures, hides many other pictures behind it. Some people see it as an actual human head, but other people look at it and can see the masculine gender, arse, or its sexy lips,” he explains.
He says the gay pride week is a chance for all gays or lesbians who have hidden their true feelings to express their real selves, as he saw when he was studying in France.
During LGBT pride events there, he saw men dressed in women’s clothes or women dressed in masculine attire during a large parade that attracted many heterosexual supporters.
“Gays and lesbians in France have the same rights as other people,” says Em Riem, known also for his sleek chairs sculpted out of Cambodian rattan.
Self-taught painter Thang Sothea, 26, has contributed 14 acrylic paintings to the exhibition. An architecture graduate from Norton University, he is well known for his graffiti-like paintings featuring Khmer script in his recent exhibition titled Look at Me! featuring pairs of eyes.
His third exhibition, entitled Don’t be Shy!, reflects themes he first addressed in his premiere solo exhibition called Happy Together, featuring men’s bodies.
“I called this series Don’t Be Shy because all of them are uncomfortable to look at. Some people may feel shy to look at them, but I want people to stop being shy and enjoy the paintings together,” says Thang Sothea.
He feels gay and lesbian people shouldn’t hide their real identities because of fear of discrimination. “They have equal rights to dress how they like,” he says. “We shouldn’t laugh at gay people or discriminate against them. And gays and lesbians shouldn’t feel shy or think they are different from anyone else. They should believe that they are a special person, and have to confront society.”
Posted by CAAI News Media at 11:39 pm