Room to Read Comes to Rye via Cambodia 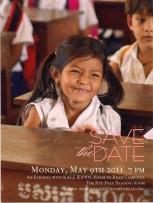 
Room to Read invites Kall Kann to share his experiences in Cambodia at Rye Free Reading Room Monday night.
By Michael Iachetta
May 9, 2011
Change the world through education, one child at a time–that sounds idealistically simple, but is a deceptively complex goal that sums up the mission of a growing global program called Room to Read.
The global non-profit organization focusing on literacy and gender equality is bringing its message to the Rye Free Reading Room Monday night at 7 p.m.
The Westchester chapter of Room to Read is launching its program by placing its mission in microcosm, spotlighting the killing fields of Cambodia.
Kall Kann was orphaned at 12 when the infamous Khmer Rouge seized power in Cambodia in 1975. He was almost 20 years old when he was able to go back to school, and almost 35 when he finished. As difficult as his experience was, Kann noticed it was even challenging for Cambodian women to obtain an education in his country.
Kann became director of Room to Read in Cambodia and hopes, along with the members of the Westchester chapter of the organization, that his story of educating the women of Cambodia– From the Killing Fields to Planting Seeds of Hope: Educating One Girl At a Time– will inspire others to get involved with the cause of global literacy.
He will explain how Room to Read is helping to rebuild Cambodia’s educational infrastructure and a culture of learning which supports girls equally.
The stated mission of Room to Read says it all: “We envision a world in which all children can pursue a quality education that enables them to reach their full potential and contribute to their community as well.”
The group works in collaboration with local communities, partner organizations and government to support literacy and reading opportunities for primary school children and to support girls' efforts to complete secondary school. Taken together, their aim is "to transform the lives of millions of children in developing countries by focusing on literacy and gender equality in education.”
Room to Read began its remarkable journey to Rye– where schools like Milton and Osborn are national blue ribbon schools of educational excellence –with the vision of John Wood.
John Wood, founder and executive chairman, launched Room to Read after a trek through Nepal back in 2000 when he visited several local schools. He came away impressed by the enthusiasm of the Nepalese students and teachers, but saddened by the lack of resources.
Wood resolved to do something about it, quit his executive job with Microsoft, and used his corporate know-how to build a global team with a goal to work with rural villages to build sustainable solutions to their educational challenge.
Their vision was to utilize non-profit management skills to provide educational access and opportunity to more than 10 million children in the developing world.
It all began with one small step: working with rural communities in Nepal to build schools and establish libraries in 2000. It has since spread to Vietnam, Cambodia, India, Sri Lanka, Laos, South Africa and Bangladesh.
The Westchester chapter was founded in 2010. Organizers Carine Verschueren, Sandra Wong Geroux and Karen Regan decided the book-filled Rye library would be a good place to launch the Room to Read program.
Each brings her own idealism and degree of corporate expertise to Room to Read.
Verschueren is the chapter's founder and co-leader. A Belgian native with a Master’s degree in international relations and a background in Finance, has worked for Mayor Bloomberg in New York City and abroad in Brussels, China, Singapore, Tokyo and New York.
Geroux, also a chapter co-leader, grew up in Honolulu and has worked in public radio. She recently returned from Haiti where she documented the lives of women in a camp for amputees, and has the savvy that comes from having worked as a professional photographer in London, San Francisco, Chicago and New York.
Regan, also a co-leader, is one of the past presidents of the Junior League of Westchester on the Sound, and brings a wealth of fund-raising experience to Room to Read as someone who has devoted many years to supporting the needs of women and children in the area.
They all live in Westchester, and want to bring the Room to Read message to Westchester’s attention. The RFRR is helping them to do just that in a program that will hopefully spread across the county and beyond. Admission is free; donations to R2R appreciated.
Further information: RFRR, 1061 Boston Post Road: telephone: 967-4100
Posted by CAAI News Media at 5:21 pm