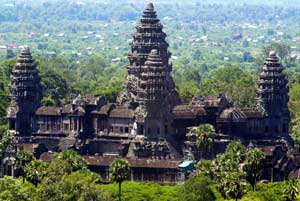 By Ramon Ho on Mon, 05/09/2011
In Northern Cambodia, a group of Buddhist monks have made plans to protect their forest home, Sorng Rukavorn, from illegal loggers and profiteers by registering it as an international ecological asset. By listing it as a bank of carbon credits, the monks hope to protect the land so that the public can continue to use its resources, and to sustain their own lifestyles.
This is done through the Reduced Emissions from Deforestation and Forest Degradation (REDD) program, an international tool of climate mitigation. Through REDD, companies and governments of industrialized nations can make payments to developing countries to reduce carbon emissions by not cutting trees. A quarter of greenhouse gas emissions produced by humans is released through deforestation, which takes away trees and plants that help balance the levels of the atmosphere by absorbing the gas produced by natural and man-made processes like burning fossil fuels for factories and cars.
Currently, the monks bid for their forest needs to be jointly validated the Verified Carbon Standard and the Climate Community and Biodiversity Standard, who are third party auditors, and also needs to attract a buyer.
The forest’s importance to the monks stems not only from its resources in medicinal herbs and food for the locals and their livestock, but also from their religious beliefs. Forests are an important symbol to Buddhist monks, who believe that Buddha was born, meditated, reached enlightenment, and died underneath a tree.
Over the past two decades, Cambodia’s forests have declined over 22%, according to the UN. It could have been much worse, as at point there was 40% of Cambodia’s land signed over over to loggers, but was later cancelled by the government.
Photo Credit: state.gov/cms_images/cambodia_temple_2006_06_08.jpg
Posted by CAAI News Media at 5:37 pm

Dear Sir,
Could you please kindly give me a contact of the monks or anyone in your article? I am planning to produce a short video clip related to how people in Cambodia work to protect their forest.

You help will be very crucial for me.