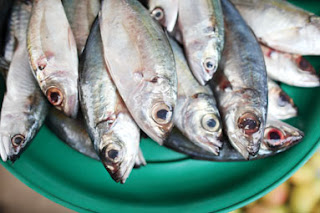 Fish for sale at a market in Sorya village in Banteay Meanchey province. Prices for some fish have increased by 23 percent this year. Photo by: Will Baxter
http://www.phnompenhpost.com/


via CAAI
Tuesday, 10 May 2011 15:01May Kunmakara and Tom Brennan
THE jump in commodity prices may benefit Cambodia’s farmers for the moment, but it also threatens the country’s poor, officials said yesterday.
Minister of Economy and Finance Keat Chhon said that while rising inflation was an issue, the resultant increase in revenues was a boon to the local agriculture sector.
“We are concerned, but it’s good for our farmers whenever food prices go up,” he said at a meeting at the ministry.
He admitted that those prices contributed to the overall growth in inflation, but said that Cambodia’s inflation rate was still much lower than other countries.
Inflation for the first quarter was up an average of 3.6 percent compared to the same quarter in 2010, according to previous figures from the National Institute of Statistics.
Cashew nuts, pork and smoked fish were among the food products seeing the biggest increases year-to-date in Phnom Penh’s markets, rising 48 percent, 41 percent and 23 percent, respectively, according
to the Ministry of Commerce.
However, rice – a staple product for most Cambodian families – saw a rise of about 2-percent during same period.
ACLEDA Bank Vice Chairman John Brinsden said that steady rice prices were the result of increased output by local suppliers meeting demand for the product.
“Rice production has surged, and the rate of growth exceeds that of other agricultural products. And that has stabilised rice prices here,” he said.
Cambodia has also stockpiled rice, which serves as a buffer against price inflation, he said.
However, expensive oil could weigh on the Kingdom’s economy, as businesses spend more on energy, said Business Research Institute of Cambodia economist Hiroshi Suzuki.
“It could affect the competitiveness of Cambodia’s exports,” he said.
The Cambodian government in the past has reduced the duty on oil imports to alleviate the pressure, and may consider doing so again if prices remain at this high level, he said.
Oil prices may even out with tensions easing in the Middle East, which would trickle down to Cambodia, he said.
But Suzuki Hiroshi said a significant threat from inflation is its effect on much of the country’s population, pulling some of them below the poverty line, which is defined by the Cambodian government as making less than US$1.50 per day.
“The most vulnerable to the inflation is the poor. It could affect the pace of poverty reduction,” he said.
Minister of Economy and Finance Keat Chhon said the number of people below the poverty line last year had been reduced to 27.4 percent of the population, and he hoped it would drop further in 2011.
Posted by CAAI News Media at 11:57 pm