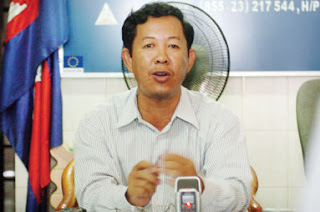 
via CAAI
Tuesday, 10 May 2011 15:02Mom Kunthear
Abuse of government funds, low teacher salaries and a lack of training and materials are weakening the Kingdom’s education system, according to a report released by the Cambodian Independent Teachers’ Association yesterday.
CITA said that it had surveyed 726 teachers across 17 provinces in March, revealing that 24 percent of teachers were concerned about low salaries, 17 percent about corruption in schools and 15 percent about a lack of study materials and teacher training. About 8 percent of those surveyed were CITA members.
CITA President Rong Chhun said yesterday that he would send the report to the Ministry of Education, Youth and Sports, which had to eliminate corruption in the education system.
“The teachers said … some school directors use government funds for their own benefit, keep money from vendors who rent school space, keep some teachers’ salaries and overtime pay and sell examination papers [to students],” he said.
“The education system in Cambodia is still bad.”
Rong Chhun said that 52 percent of teachers surveyed wanted higher salaries and 15 percent wanted new principals in their schools.
“If the ministry of education does not find a solution for teachers who are facing these problems, we will keep demanding action,” he said, adding that association members were willing to protest or strike.
Thong Soeun, a former primary school teacher from Prey Veng province, said yesterday that he had changed professions because his teaching salary was too low to support his family.
“I suspended my teaching one year ago and now work elsewhere because my teaching salary was low,” he said, claiming that the principal at his school had taken government funds intended for the school’s development.
In March, Rong Chhun sent a letter to Prime Minister Hun Sen urging government officials to provide teachers with an additional 20,000 riel (US$5) a month to compensate for a rise in living expenses.
Neither Education Minister Im Sethy, nor officials from the Ministry of Education could be reached for comment yesterday.
Posted by CAAI News Media at 11:55 pm