At Asean, no solution


via CAAI
Published: 8/05/2011 at 03:31 PM
Online news:
The Association of Southeast Asian Nations on Sunday failed to resolve a bitter border row between Thailand and Cambodia which hijacked the agenda of an annual summit in Indonesia. 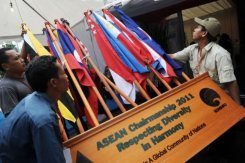 Workers move the flags of the 10 member countries of the Association of Southeast Asia Nations (ASEAN) in Jakarta. Southeast Asian leaders met Sunday for the final day of an annual summit that has been hijacked by a bitter feud between Thailand and Cambodia over a tiny patch of disputed borderland.
Asean leaders said the dispute was threatening regional unity and overshadowing the 10-nation group's strategic message of economic integration, but were unable to wring any compromises from the feuding neighbours.
The bloc's weakness in conflict resolution was thrown into stark relief when the leaders' final statement merely said the dispute "should be amicably resolved in the spirit of Asean solidarity".
It also welcomed an in-principle agreement to allow Indonesian military observers on the disputed border and called on Jakarta, the current chair of Asean, to continue its mediation efforts.
Indonesian President Susilo Bambang Yudhoyono hosted an unscheduled meeting with the Thai and Cambodian leaders on Sunday morning but failed to achieve a breakthrough in negotiations.
Cambodian Prime Minister Hun Sen admitted after the meeting that the row was "spoiling" the summit, which was supposed to focus on long-term plans to create a harmonised economic community by 2015.
"Everyone knows that the problem of the Thai-Cambodia border has been spoiling the atmosphere and also creates a challenge for Asean," he told reporters.
Eighteen people have been killed and 85,000 temporarily displaced in weeks of clashes over ownership of a small patch of territory surrounding an 11th-century Khmer temple. The temple itself belongs to Cambodia.
In a highly critical tone not usually heard at Asean meetings, Hun Sen on Saturday accused Thailand of invading Cambodia and seeking to prolong the conflict "in order to violate weaker neighbouring Asean members".
Thai Prime Minister Abhisit Vejjajiva dismissed the accusation and warned that the dispute, which was not on the formal agenda of the summit, threatened to undermine Asean's broad strategic vision.
"I accept that the issue could affect the credibility of Asean. We must therefore make sure that any problem should be solved, locally, bilaterally and if needed with the facilitation of the region," he said.
"Thailand recognises full well that any conflict between Asean member states can undermine Asean?s community-building efforts."
Other issues on the table at the summit included food and energy security, territorial disputes in the South China Sea, the scourge of human trafficking and East Timor's membership bid.
Burma stole the headlines on Friday when Asean officials announced that the military-led country -- which is under Western sanctions for serial human rights abuses -- had asked to chair the group in 2014.
US-based Human Rights Watch said Asean would become the "laughing stock of intergovernmental forums" if it granted the request.
The Asean chairman's statement at the end of the meeting said only that the request had been "considered", meaning the leaders deferred a decision to a later date.
Yudhoyono said Burma, which held elections last year that were derided as as a farce by critics, would have to "continue the process of democratisation" so that its leadership of Asean would not be "viewed negatively".
The Asean leaders also emphasised the "need for a breakthrough" in talks with Beijing about a code of conduct in the South China Sea, a strategic maritime route where China and several Asean states have rival territorial claims.
Indonesia has been trying to find a solution to the Thai-Cambodia conflict on behalf of Asean, but so far it has achieved little except the in-principle agreement to accept a small team of military observers on the border.
Officials said Hun Sen and Abhisit agreed to have their foreign ministers meet again in Jakarta on Monday to discuss the conflict further.
Putting a brave face on the episode, Asean Secretary General Surin Pitsuwan said: "The fact that they are meeting is a good sign."
But other Asean leaders were not so sanguine.
Philippine President Benigno Aquino, speaking to reporters late Saturday, said that Asean unity was at stake and expressed concern that the conflict could worsen.
"How can we have one Asean, one family if we have two major components who cannot solve their problems?" he said.
Posted by CAAI News Media at 2:54 pm