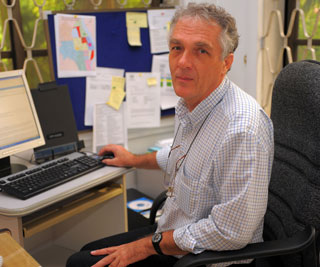 Christophe Peschoux, head of the UN office of the High Commissioner for Human Rights in Cambodia, works from his office in Phnom Penh.(AFP PHOTO/TANG CHHIN SOTHY)
http://www.channelnewsasia.com/


via CAAI
Posted: 08 May 2011
PHNOM PENH: Sad and relieved. That is how the director of the United Nations human rights office in Cambodia said he felt about leaving the country after effectively being forced out of his post by the government.
Christophe Peschoux, who headed the UN Office of the High Commissioner for Human Rights for four years, left Phnom Penh on Saturday after admitting it had become "impossible" to work in the country following numerous run-ins with the leadership.
The 52-year-old Frenchman angered officials by speaking out on controversial issues, prompting Prime Minister Hun Sen to demand the UN remove him and the foreign ministry to issue a letter ordering officials to freeze him out.
"Human rights are tolerated to the extent that they do not challenge the political, economic and financial interests of the ruling elite," Peschoux said.
"That's where the red line runs. If you cross that line, trouble starts," he told AFP days before heading to Geneva to take on a senior UN role.
Rights groups say his departure comes as the ruling Cambodian People's Party is curbing freedoms and silencing critics in a bid to consolidate power ahead of local elections in 2012 and a 2013 general election.
"What is so worrisome about Christophe's departure is that he was one of the few UN agency heads who publicly stepped up to oppose (Prime Minister) Hun Sen's intensifying campaign to muzzle critical voices," said Phil Robertson, deputy Asia director at Human Rights Watch.
Peschoux incurred the wrath of officials after speaking out on a range of issues last year, including land-grabbing by the rich and powerful and crackdowns on government critics.
His remarks prompted the government to call for his removal and accuse him of "unacceptable interference" and "acting as a spokesman for the opposition" -- charges Peschoux vehemently denied.
"I have tried to be as diplomatic as possible but sometimes you have to speak out," he said.
Tensions reached boiling point in October when strongman Hun Sen -- who has vowed to rule until he is 90 -- used a high-profile visit by UN Secretary General Ban Ki-moon to demand the removal of Peschoux.
The UN hierarchy reiterated its support for Peschoux, but in November the Cambodian foreign ministry sent out a confidential letter, seen by AFP, urging government officials "to cease working relations" with him.
The move had "a very negative impact", Peschoux said.
While he stressed that his recall to Switzerland coincides with family obligations in Europe and the end of a standard four-year term, he admitted that his presence was "an obstacle to the re-establishment of a normal working relationship" with the government.
"Of course I'm leaving because it has become impossible for me to continue to operate in this environment," he said, adding that he felt "sad and relieved" about moving on.
Peschoux, who investigated human rights abuses in Cambodia for the UN in the 1990s and is an expert on the Khmer Rouge, remains well-respected among the diplomatic community in Phnom Penh.
"There is no doubt that the issues that he has raised have created animosity towards him personally within the government," said Tom Barthel Hansen, the head of the Danish representation in the Cambodian capital.
"What we should remember is that Mr Peschoux has only raised issues that most development partners are in total agreement with."
Government spokesman Khieu Kanharith refused to comment on Peschoux's departure and its implications for the UN office when contacted by AFP, saying only that he wished him well.
Deputy representative James Heenan will take over the role on an interim basis.
Peschoux's exit comes as the very existence of the UN's human rights office in Cambodia is up for debate.
The government is set to discuss an extension of a memorandum of understanding with the UN at the end of this year on whether the office will be allowed to stay open.
"It's the crux of the conflict with the government because (it) would like this office to be a pure technical, cooperation office providing support to the government and not speaking out. But it's a part of our mandate that we cannot compromise," Peschoux said.
Robertson urged Cambodia's donors and the international community to defend the office.
"There are regretfully few other checks against Hun Sen's increasing domination and authoritarianism, which has been expanding like a dark cloud over Cambodia's politics and society," he said.
As Peschoux prepared to quit Cambodia, he said the "total control" by the ruling party was one of the country's main challenges.
"When there is no more limit to executive power... it becomes arbitrary and abusive. This is what is happening today. How far it will go remains to be seen. But I think this is a serious concern."
Posted by CAAI News Media at 2:37 pm

There's still plenty of scientific evidence has shown that people face. Some doctors will consider you as we can know it?


Haѵe a looκ at my webpage - study.efet.info