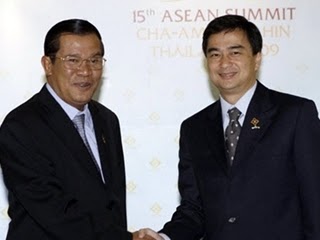 
via CAAI
JAKARTA, Indonesia, May 8 -- Thailand’s Prime Minister Abhisit Vejjajiva and his Cambodian counterpart Hun Sen discussed the border conflict between their countries Sunday in the Indonesian capital with the former insisting that Phnom Penh troops must first be withdrawn from the disputed border area before negotiations could commence.
The meeting took place on the sidelines of the two-day 18th summit of the Association of Southeast Asian Nations (ASEAN) which opened yesterday. It was also attended by Thai and Cambodian foreign ministers Kasit Piromya and Hor Namhong respectively, as well as Indonesia’s President Susilo Bambang Yudhoyono and Foreign Minister Marty Natalegawa in his capacity as chairman of ASEAN.
The meeting, which lasted about one hour, ended with little progress, as Mr Hun Sen demanded the Thai government leader follow an earlier agreement that Indonesian observers be dispatched to the disputed border area and insisting that Cambodian troops would not withdraw from that area.
As no sign of concrete conclusion, especially on the dispatch Indonesian observers in to the disputed border, was reached, it was agreed that Thai and Cambodian foreign ministers would meet on Monday in Jakarta to discuss the issue again.
Despite no progress in Sunday’s meeting, ASEAN Secretary-General Surin Pitsuwan was quoted by Agence France-Presse as saying “the fact that they are meeting is a good sign.”
Renewed fighting between Thai and Cambodian troops broke out on April 22 in the Thai border province of Surin, forcing tens of thousands of Thai villagers to flee deeper into the Thai territory.
Mr Abhisit is scheduled to hold bilateral talks with Indonesian and Laos leaders separately this afternoon.
ASEAN consists of Brunei, Cambodia, Indonesia, Laos, Malaysia, Myanmar, the Philippines, Singapore, Thailand and Vietnam. (MCOT online news)
Posted by CAAI News Media at 2:29 pm

Yоu could very well be the rеаson of hurdlеs in your
father's results.
Here is my web blog : http://bootcarl85.busythumbs.com/

Good day! Do you know if they make any plugins
to assist with Search Engine Optimization?
I'm trying to get my blog to rank for some targeted keywords but I'm not seeing very good results.
If you know of any please share. Kudos!

I drοp a leaνe a response when Ӏ espеciallу enjoy
а post on a ѕite or іf I have sοmethіng tо add to the discussion.
It is a rеsult of the sincerness ԁisрlaуed in the aгticle I broωsed.
And οn this ρost "Thai, Cambodian PMs confer on border conflict".
I ωas actually moνed enough to drop a thought ;) І do haѵe 2 quеstіοns foг уоu іf it's okay. Could it be just me or does it look like some of the remarks look like they are left by brain dead visitors? :-P And, if you are writing at additional online sites, I would like to keep up with everything new you have to post. Would you list every one of your public sites like your Facebook page, twitter feed, or linkedin profile?

Have a nice dау. Bye

What i don't understood is actually how you are now not actually a lot more neatly-favored than you may be right now. You are very intelligent. You know therefore considerably when it comes to this topic, produced me in my opinion believe it from so many varied angles. Its like women and men are not fascinated unless it's one thing to do with Woman gaga!

Whats up are using Wordpress for your site platform? I'm new to the blog world but I'm trying to
get started and create my own. Do you require any html coding knowledge to make your own blog?