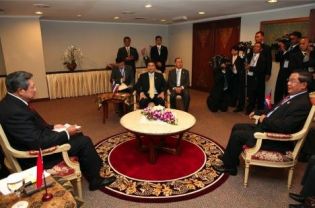 In this photo released by the Presidential Secretariat, from left, Indonesian President Susilo Bambang Yudhoyono, Cambodian Prime Minister Hun Sen, right, and Thai Prime Minister Abhisit Vejjajiva, center, during a trilateral meeting mediated by the Indonesian president in Jakarta on Sunday. (Antara Photo)
Though the Thailand-Cambodia border dispute ended up hijacking the 18th Asean Summit over the weekend in Jakarta, little progress was made in resolving it.
President Susilo Bambang Yudhoyono mediated talks on Sunday morning between Thai Prime Minister Abhisit Vejjajiva and his Cambodian counterpart, Hun Sen, because, as he said in his opening statement, little can be accomplished without peace between member countries.
But the talks concluded with no resolution.
In separate press conferences held later, both leaders again engaged in a war of words.
The Cambodian prime minister, who held his press conference first, said the prolonged dispute between the two neighbors had “spoiled Asean’s atmosphere.”
As a result, “the situation was tense in our plenary meeting,” Hun Sen said.
During Saturday’s plenary meeting, Abhisit said the Thai cabinet had approved the terms of reference for the deployment of Indonesian observer teams, which have already been revised seven time. However, he reiterated that the Thai government required Cambodian troops to first be withdrawn from the disputed area.
But Hun Sen did not budge: “The withdrawal of our people from our land is not acceptable.”
The first border clashes erupted in February over overlapping claims to the small area surrounding the Preah Vihear Temple, which belongs to Cambodia. The second round of clashes, which erupted in April, took place in Phanom Dong Rak district in Thailand’s Surin province, more than 100 kilometers away.
Hun Sen said Cambodia wanted to settle the Preah Vihear dispute under the auspices of Asean and Indonesia — the current chair of the regional bloc — but he proposed the clashes in Surin be resolved bilaterally.
Abhisit said in his press briefing later on Sunday that he found the idea of addressing two similar issues with different approaches “hard to understand.”
“There’s a certain amount of inconsistency,” he said. “It should be discussed in one package.”
Putting a brave face on the episode, Asean Secretary General Surin Pitsuwan said, “The fact that they are meeting is a good sign.”
But other Asean leaders were not so sanguine. Philippine President Benigno Aquino, speaking to reporters late on Saturday, said Asean unity was at stake and expressed concern that the conflict could worsen.
“How can we have one Asean, one family, if we have two major components who cannot solve their problems?” he said. “If we are disunited they can easily push us around … so it is in the interest of Asean that Thailand and Cambodia should resolve the issue.”
There is a sliver of hope, though. Hun Sen said the foreign ministers of both countries would extend their stay in Jakarta by a day in yet another bid to find common ground.
Abhisit said he hoped the observer teams could be on the ground quickly to prevent further clashes. “We want to be good neighbors,” he said.
Additional reporting from AFP
Posted by CAAI News Media at 3:08 pm