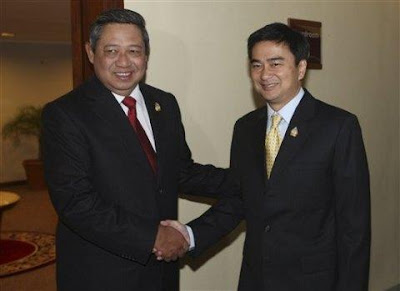 Photo: AP
Indonesian President Susilo Bambang Yudhoyono, left, shakes hands with Thai Prime Minister Abhisit Vejjajiva before their trilateral meeting with Cambodia in Jakarta, Indonesia, May 8, 2011
A meeting Sunday in Indonesia between the prime ministers of Cambodia and Thailand on the sidelines of a southeast Asia regional summit has not produced an agreement to end the two countries' ongoing border dispute.

The talk was mediated by Indonesian President Susilo Bambang Yudhoyono on the final day of a two-day summit of the Association of Southeast Asian Nations.
Repeated outbreaks of fighting along the Cambodia and Thailand border have claimed more than 20 lives this year. Tens of thousands of people have fled their homes on both sides of the border.
The dispute centers around control of ancient temples claimed by both nations.
On Friday, Indonesia's foreign minister, Marty Natalegwa, announced Cambodia and Thailand have agreed to accept Indonesian monitors on the border to help prevent further military clashes. However, Cambodia harshly criticized a request by Thailand to first remove troops from Cambodia's side of the border.
Posted by CAAI News Media at 2:59 pm