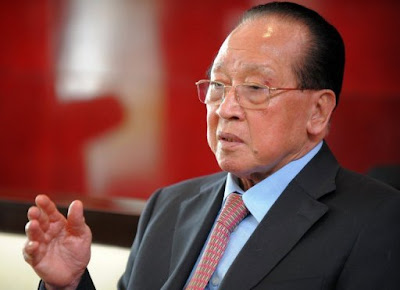 Both countries, Cambodia and Thailand, have accused each other of sparking the violence (AFP/File, Tang Chhin Sothy) 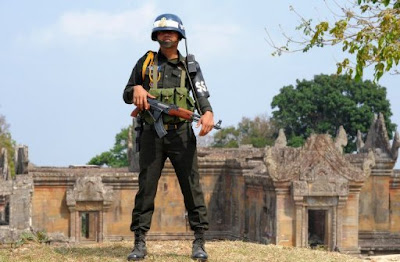 Thailand and Cambodia both claim to own a 4.6 square kilometre (1.8 square mile) area around the Preah Vihear temple (AFP/File, Tang Chhin Sothy)

via CAAI
By Arlina Arshad (AFP)
JAKARTA — Cambodian Foreign Minister Hor Namhong on Friday rejected a Thai demand to withdraw troops from an 11th-century Khmer temple at the disputed border, saying Bangkok was not sincere about peace.
"We never can withdraw our troops from our own territory. That should be very clear," Hor Namhong told reporters after a meeting in Jakarta with Indonesian Foreign Minister Marty Natalegawa.
The Indonesians are trying to broker a ceasefire and the deployment of neutral military observers to the flashpoint area on the Thai-Cambodian border where some 18 people have died in fighting in recent months.
The issue is likely to be discussed at a summit of Association of Southeast Asian Nations (ASEAN) leaders in Jakarta starting on Saturday, where plans for a more closely integrated regional community will top the agenda.
"Non-development, non-progress, lack of development, the status quo is not an option," Natalegawa said after meeting his counterparts from both countries.
"We're seeing a status quo meaning exchange of fire and artillery as we talk about ASEAN community. That's not quite right. There's something wrong if we keep on doing this," he said.
Both countries have accused each other of sparking the violence, which centres on territory around the 11th-century Preah Vihear temple, the most celebrated example of ancient Khmer architecture outside Cambodia's Angkor.
The World Court ruled in 1962 that the temple belonged to Cambodia but both countries claim ownership of a 4.6 square kilometre (1.8 square mile) surrounding area. The temple was granted UN World Heritage status in 2008.
Cambodia has previously denied it has troops stationed at Preah Vihear itself, although it has soldiers in the contested area.
The neighbours agreed in late February to allow Indonesian observers near Preah Vihear, but Thailand has been dragging its feet on their deployment as fighting continues.
"The problem is the willingness of Thailand to accept the observers or not -- that is the real problem," Hor Namhong said.
Thai Foreign Minister Kasit Piromya did not speak to reporters after his talks with Natalegawa and did not meet directly with his Cambodian counterpart.
Indonesia currently holds the chair of ASEAN and has been trying to use its position to broker an end to the hostilities, which are undermining ASEAN's ambitions to create a closely integrated community by 2015.
Natalegawa said that both countries had agreed in principle to accept 15 Indonesian observers each, but outstanding issues remained to be resolved before they could be deployed.
"We're ready (to send observers) but Thailand is saying that before the deployment of observers can be made, they require the redeployment of Cambodian troops out of the temple," he said.
"This issue is not governed in the terms of reference. It's outside the terms of reference proper. This is where we are now."
UN Secretary-General Ban Ki-moon has called for a ceasefire and said the neighbours should launch "serious dialogue" to resolve the dispute, which temporarily displaced about 85,000 people.
Posted by CAAI News Media at 12:31 am