No border talks at Asean


via CAAI
Published: 6/05/2011 at 04:41 PM
Online news: Local News
JAKARTA - Initial hopes of bilateral talks between Thailand and Cambodia and of trilateral talks with Indonesia as the third party during the Asean Summit have been dashed, with the major obstacle being the issue of troop withdrawal.
However, the Asean chairman, Indonesian Foreign Minister Marty Natalegawa, on Friday reaffirmed that discussions on the Thai-Cambodian border conflict would continue during the Asean Summit in Jakarta this weekend. 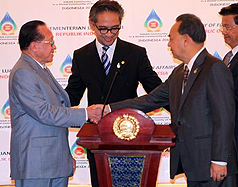 Foreign Ministers Kasit Piromya (right) greets his Cambodia counterpart Hor Namhong (left) shortly after a press conference by Indonesian Foreign Minister Marty Natalegawa (centre) on the Informal ASEAN Ministrial Meeting at Indonesian Foreign Ministry office in Jakarta on Feb 22, 2011. (Photo by EPA)
Foreign Minister Kasit Piromya did not speak a single word after his 45 minute meeting with his Indonesian counterpart, but Mr Natalegawa said there was one development came out of his separate talks with the Thai and Cambodian sides here.
Discussions of the terms of reference (TOR) for deployment of the Indonesian observer team could be considered concluded, he said.
"The TOR is already a done deal as the two sides reaffirmed their agreement, but it remains how to operationalise the assignment on the ground of Indonesian observers. We're looking for the creation of conducive conditions," said the Asean chairman.
He noted that as the country sending the observers, he believed it was essential to create conducive conditions and he would try to redefine what each country would provide.
The Indonesian minister said both Thailand and Cambodia had recognised that the political process and diplomatic negotiations must be continued even though Cambodia had taken the dispute back to the International Court of Justice (ICJ).
While acknowledging troop withdrawals as a major stumbling point, he emphasised that the risks inherent in any delay, the very real exchanges of gunfire and artillery bombardment in border areas, continued.
"Delay is not neutral, delay is not without impact. There is greater risk of intentional or inadvertent conflicts," said Mr Natalegawa.
He noted that, modestly but importantly significant, was the fact that observers from the third party could be deployed.
"That's why I'm hesitant to say whether withdrawal or no withdrawal (a conducive condition), but we view that our observers will be well received. In fact, redeployment or withdrawal of troops can be further discussed at the General Border Committee.
"It does not have to be resolved in one go, as long as there is a political will," he said.
Asked if he was disheartened by the apparent impasse, he said he personally he was fine, as he has infinite patience, but as a country and a host of Asean he wanted to see some movement.
"We need some progress as non-development and status quo means shelling and artillery fire is still going on while we're talking about community building — that is not quite right," he said.
Thai Foreign Ministry spokesman Thani Thongpakdi said Mr Kasit had told the Asean chairman that Phnom Penh had a well-planned strategy, to begin its invasion and then forward the issue to the ICJ.
Mr Thani confirmed that Thailand had not sent a letter of acknowldgement for the positioning of the Indonesian observer team to Jakarta. Thailand needed first to be confident that Cambodian troops would withdraw from the disputed area around Preah Vihear temple.
The Cambodian military presence inside the perimeter of the cultural hertitage site was in violation of the Hague Convention of 1972, the Thai spokesman said.
He said details of the Indonesian observer team's deployment had already been agreed upon, including the area coverage and timeline.
Cambodia would allow 15 Indonesians at three sites (Ta Sem, Chak Chreng and Pram Makara) while Thailand allow the same number at four sites in Si Sa Ket’s Kantharalak district, at Ban Phumsrol. None of the sites were in the immediate vicinity of the disputed 4.6 square kilometre area around the ancient Hindu temple.
Cambodian Foreign Minister Hor Nam Hong earlier today said his country would not withdraw its troops from its "own territory". 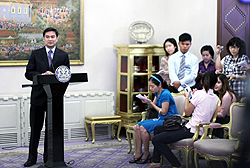 Prime Minister Abhisit Vejjajiva gives a press interview at Government House on May 6, 2011
Mr Hor Nam Hong said the problem with the border conflict clearly remained the willingness of Thailand to agree with the deployment of Indonesian observers under the TOR.
"Cambodia has already sent a letter of acceptance to Indonesia's proposed TOR on May 2, and we hope will Thailand do likewise," said the Cambodian minister.
Prime Minister Abhisit Vejjajiva said in Bangkok before leaving for Jakarta that he had no plans to meet Cambodian Prime Minister Hun Sen during the Asean Summit to discuss the border dispute.
Mr Abhisit yesterday said Cambodian troops and villagers must vacate the 4.6-square-kilometre disputed border area around Preah Vihear temple before Indonesia observers can be deployed.
Posted by CAAI News Media at 8:20 am