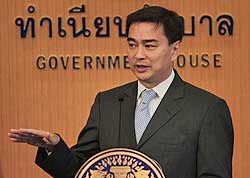 He was speaking the day before his planned trip today to attend the Asean Summit in Jakarta in which his Cambodian counterpart Hun Sen is also participating. But Mr Abhisit has already said there were no plans to meet Hun Sen.
The bloody border fighting between Thailand and Cambodia looks set to be among the issues dominating the Asean Summit this weekend.
Mr Abhisit said the documents for the deployment of Indonesian observers pose no problem but the presence of Cambodian troops and citizens is a breach of the Memorandum of Understanding (MoU) signed by both countries in 2000.
At the last meeting on May 3, the cabinet agreed to the planned deployment of Indonesian observers along the Thai-Cambodian border near the Preah Vihear temple _ but on the condition Cambodia adheres to the MoU by withdrawing its troops from the area.
Mr Abhisit said he had no idea if Phnom Penh would agree to this but it was the duty of Indonesia to coordinate with the Cambodian government about the matter.
In the wake of the sporadic border clashes, Indonesia, in its capacity as chair of the Association of Southeast Asian Nations (Asean), offered to broker talks between the two countries and deploy observers.
Mr Abhisit said it would depend on the progress of talks between Thailand and Indonesia and between Cambodia and Indonesia if the issue would be brought up at the Asean Summit.
According to Mr Abhisit, the Thai foreign minister will reaffirm that Thailand has not initiated any violence and will give its full cooperation to efforts to resolve the border row amicably.
Foreign Minister Kasit Piromya will meet his Indonesian counterpart Marty Natalegawa, who serves as Asean chair, on the sidelines of the Asean Summit, and then see his Cambodian counterpart Hor Namhong separately.
Mr Abhisit also played down speculation that Cambodia's latest move to involve the International Court of Justice (ICJ) in the conflict would put Thailand at a disadvantage.
Cambodia has asked the ICJ for an interpretation of its 1962 ruling on the Preah Vihear temple.
Mr Abhisit said he would rather not discuss the issue due to its sensitivity. He added there are legal aspects Thailand can contest in court against the Cambodian move.
He also said the ICJ's hearing of the Cambodian complaint presented a chance for Thailand to show that each of the clashes had been planned by Cambodia and it was a calculated move to internationalise the border conflict.
The premier, however, urged people to refrain from speculating on the outcome of the case at the ICJ as this could backfire.
"Given the situation, I want everyone to stay undivided. I have said it before we shouldn't say things that will harm us later. We should stay united to protect the national interest," he said.
Meanwhile, 2nd Army spokesman Prawit Hookaew said the border tensions have eased and there have been no clashes over the past two days.
He said the fighting has stopped because field commanders on both sides have communicated with each other. Thai and Cambodian troops have maintained their positions but they are less tense.
Col Prawit said the reopening of Chong Jom border pass in Surin's Kap Choeng district was a result of discussions between 2nd Army commander Lt Gen Thawatchai Samutsakhon and the Surin governor.
Trade at the Chong Jom border pass was light the second day after the border reopened with only a fifth of stores open for business. 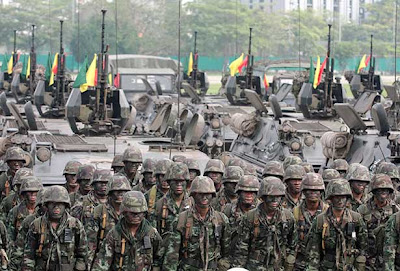 Soldiers from the 2nd Cavalry Division gather in the division’s compound in Sanam Pao in Bangkok to show their combat readiness. - CHANAT KATANYU
Posted by CAAI News Media at 12:03 am