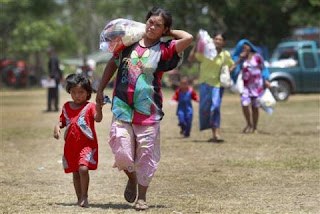 Photo: AP
Thai women and children walk to a waiting bus to transport them home after sporadic fighting between Thai and Cambodian troops was reported at a refugee camp in Surin province, northeastern Thailand, May 2, 2011
Ahead of a regional summit, Indonesia's foreign minister has said Thailand and Cambodia agreed to allow Indonesian monitors to go to the border between the two countries to help prevent further military clashes.
In his role as the chairman of the Association of Southeast Asian Nations (ASEAN), Indonesian Foreign Minister Marty Natalegawa on Friday said there has been a breakthrough in ASEAN's efforts to mediate an end to the Thai-Cambodia border conflict.
"I can report to all of you that the two sides have agreed to the terms of reference for the observer team, the Indonesian observer team that we have been discussing for several weeks now," said Natalegawa. "That is a done thing in the sense that the negotiations have been concluded. Cambodia has formally acceded or formally agreed to the terms of reference. Thailand has also agreed to it but they are yet to fully conclude the formal exchange of documents."
The terms of reference include how many Indonesian observers will be dispatched and the specific areas along the border where they will operate.
Since February, more than 20 people have died in repeated clashes between the two ASEAN members along their disputed border. Tens of thousands of people have fled their homes on both sides of the border.
The heart of the disagreement is a 900-year-old Hindu Khmer temple known as Preah Vihear in Cambodia and Prah Viharn in Thailand. The temple sits in Cambodia, but Thailand claims adjacent land that includes a key access route to the complex. The countries have fought sporadically over the border since 2008.
Natalegawa met with foreign ministers of the other ASEAN nations Friday. On Saturday, ASEAN national leaders begin a two-day summit in Jakarta.
The Indonesian foreign minister says talks Friday included the question of Burma's request to take over the chairmanship of ASEAN in 2014. Human Rights Watch objects to the idea of Burma (also called Myanmar) leading the association, given it says, the country's long record of human rights abuses and its lack of democratic development.
While the ASEAN heads of states will decide if Burma's bid is accepted, Natalegawa said some concerns were expressed at the ministerial level.
"The state of readiness of Myanmar to chair ASEAN in 2014, which is quite a critical year for ASEAN, on the eve of its community in 2015, the state of readiness extends beyond practical arrangements readiness but also other dimensions that we need to ascertain ourselves," added Natalegawa.
Burma passed up its chance to take the rotating chairmanship in 2005, after the United States and European Union threatened to boycott ASEAN events if Burma's government was at the helm.
Natalegawa says the foreign ministers also addressed the issue of the South China Sea where China and some ASEAN countries have competing claims to small islands and areas believed to be rich in oil. He says ASEAN and China are continuing to work together to develop a declaration of conduct to help resolve disputes.
Posted by CAAI News Media at 8:23 am