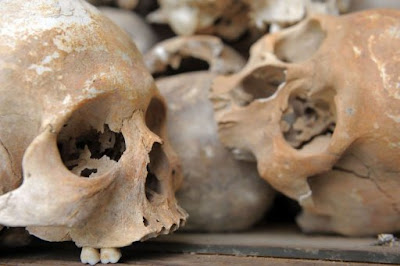 via CAAI
PHNOM PENH — Survivors of the brutal Khmer Rouge regime have urged Cambodia's UN-backed court to be more transparent about two politically sensitive new cases against war crimes suspects.
The court, dogged by allegations of political interference and strapped for cash, has yet to announce whether it will go ahead with a third and fourth case against five unnamed members of the brutal 1975-1979 regime.
Despite 20 months of investigations, the court "remains weak in providing meaningful information to the victims" about these two cases, prominent Khmer Rouge survivor Youk Chhang told AFP.
"The millions of Cambodian survivors of the regime deserve to know what the (court) is doing in their name," said Youk, the head of the Documentation Centre of Cambodia, which researches Khmer Rouge atrocities.
Frustrated with the lack of transparency at the court, another regime survivor took the unusual step of publicly naming all five suspects in a press release on Thursday.
The move puts author and human rights activist Theary Seng at risk of being in contempt of court, legal experts said.
Tribunal monitors have in recent weeks said they expect both cases to be dropped though the court has remained tight-lipped about any new developments.
"The court is being too secretive in relation with these cases," Clair Duffy from the rights group Open Society Justice Initiative told AFP.
"I think the judges are worried that the more information is in the public domain the more difficult that will make it to dismiss these cases on a legitimate basis."
Cambodian Prime Minister Hun Sen -- himself a mid-level Khmer Rouge cadre before turning against the movement -- has repeatedly voiced opposition to further trials, saying they could plunge the country back into civil war.
Late last year, the premier even told visiting United Nations chief Ban Ki-moon that new cases were "not allowed".
A terse statement by the court last week announcing the closure of initial investigations into the third case -- without providing details of the crimes -- adding to speculation these suspects will never see the inside of a courtroom.
A tribunal spokesman re-iterated that the investigations were confidential.
"When no one has been arrested or formally charged it's impossible to give information about the scope of the investigations," said Lars Olsen.
In its landmark first case, the tribunal sentenced former prison chief Kaing Guek Eav to 30 years in jail in July for overseeing the deaths of 15,000 people. The case is now under appeal.
A second trial involving four of the regime's most senior surviving leaders is due to start in the middle of the year.
Led by "Brother Number One" Pol Pot, who died in 1998, the Marxist Khmer Rouge regime emptied cities in the late 1970s in a bid to create an agrarian utopia, killing up to two million through starvation, overwork and genocide.
Posted by CAAI News Media at 8:36 am