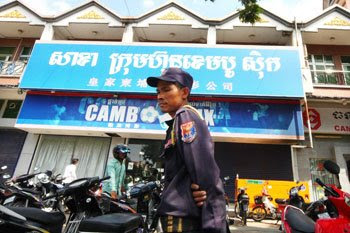 Announcing the decision at the National Institute of Education on Tuesday, the prime minister acknowledged the likely financial fallout, saying the company would be closed no matter the extent of compensation offered. A figure has not been given yet as to how much Cambo Six will receive once its operating licence expires in 2011.

Hun Sen said that in the long term the decision would not affect the overall wealth of the nation: "The country cannot become rich because of gaming tax revenue," he said.

"I think that Cambo Six's manager would understand and appreciate Cambodia's social problems, which have led to the company's closure," Hun Sen said.

Cambo Six could not be reached for comment on Tuesday.

Chea Peng Chheang, secretary of state at the Ministry of Finance, said Tuesday he had not yet received any information on ending Cambo Six's operating licence.

In 2008, tax revenue from the gaming industry - including Cambo Six and about 30 casinos along the Kingdom's borders - reached more than US$20 million. The government makes between $500,000 and $1 million in tax revenue each year from Cambo Six, the Ministry of Finance has said previously, although an exact figure for last year was not immediately available, said Mey Vann, director of the Department of Finance Industry.

Further potential economic fallout was acknowledged by the prime minister and opposition parties. Hun Sen attempted to reassure business leaders by saying that the law would be respected so as not to "destroy" the investment climate.

"I think the company could sue the government if the licence is terminated," he said.

"But it may be possible to terminate if the government can find mistakes such as inaccurate tax records."
The company's closure would be "strongly supported" by the public, he added. The move is another blow to Cambodia's gaming industry after a difficult six months that has seen revenues plummet as the effects of the global financial crisis have been increasingly felt, a situation further compounded by tensions on the Thai border, where many of the Kingdom's casinos are situated.

Casino tycoon Phu Kok An said he has seen the number of gamers - mostly Thais - drop from about 1,000 a day in September to about 20 a day this month.
Posted by CAAI News Media at 11:36 pm