Khmer-language radio programs for Chams in the works 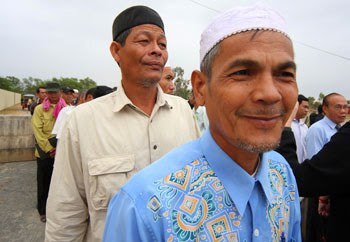 Photo by: HENG CHIVOAN
A Cham muslim queues up at the Khmer Rouge Tribunal last week.

THE president of the Cambodian Muslim Development Foundation (CMDF) said Monday that his organisation was cooperating with a nonprofit organisation based in Malaysia to produce Khmer-language radio programming geared towards the Cham community that could begin airing as soon as July.

CMDF President Othsman Hassan said the programming would include music as well as news reports on Cham culture and other slots on more general issues such as education and health.

He said the Malaysian organisation, Yayasan Salam, would send experts to the Kingdom in the next few months to train Cambodian Muslim staffers.

He said he has contacted three local radio stations, adding that he hopes to begin broadcasting with Bayon Radio on a trial basis in July.

"We plan to pay [US$40,000] to broadcast our programs in the first year on one station, and we plan to pay $60,000 to expand to two stations in the second year," said Othsman Hassan, who is also a secretary of state at the Ministry of Labour and Vocational Training. The second station will be Radio Phnom Penh, he said.

The programming will also include a focus on Malaysia, including news on the Malaysian economy, Muslim culture in Malaysia and the situation of Cambodian workers who have migrated there.

Othsman Hassan said Malaysian programming would appeal to the local Cham community because of the strong ties between the two countries.

But he also said he hopes aspects of the programming would appeal to "all people in Cambodia".

An untapped marketed
Sles Nazy, program director of Radio Sap Cham, a Cham-language radio station, said he hopes Othsman Hassan will be successful in broadcasting news about Cambodian Muslims throughout the country.

His own station was founded in 2004 but did not reach all 24 provinces and municipalities until early 2008.

He said he believed that Othsman Hassan would get his project up and running soon.

But Ahmad Yahya, the president of Cambodia Muslim Community Development and the founder of Radio Sap Cham, said Othsman Hassan previously said the programming would launch in 2008 and had therefore failed to deliver on time.
Posted by CAAI News Media at 12:49 am

What i do not realize is in truth how you are not really
a lot more smartly-preferred than you might be
right now. You're very intelligent. You recognize thus considerably with regards to this matter, made me for my part imagine it from a lot of various angles. Its like women and men don't seem to be fascinated unless it's something to do with Lady gaga! Your own stuffs excellent. All the time maintain it up!
Also visit my website : liverpool transfer news 2013