Time of reckoning for Khmer Krom 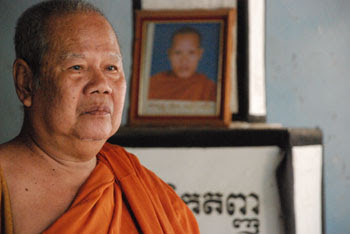 EUROPE TAKES NOTICE AMID REPORTS OF ABUSES
In December 2008, two Italian parliamentarians - one representing the EU - visited the region to advocate for greater cultural and religious freedoms for Khmer Krom. They were prevented from boarding a flight from Phnom Penh to Ho Chi Minh City. The rebuff came from a Vietnamese state tour agency claiming the pair failed to supply sufficient itinerary information before their arrival, but to most local observers it seemed to be a thinly veiled attempt by some Vietnamese government officials to thwart any attempts at advocacy for ethnic Khmers in their country. Two months earlier the EU passed a resolution calling for increased pressure on human rights reforms in Vietnam, including a specific mention of "discrimination" and "persecution" against Khmer Krom, and, in one of its few references to individuals, singled out the case of Tim Sakhorn, an outspoken Khmer Krom monk who disappeared in Phnom Penh 2007, with some reports stating that he was crammed into a Toyota by unidentified assailants. He resurfaced in Vietnam, was charged with violating national unity, and after a year in prison, now reportedly lives under house arrest in Vietnam.

Khmer Krom monks in Phnom Penh prepare to mourn slain brethren, while Vietnam is called to defend treatment of ethnic Khmers amid fresh stream of criticism by rights groups.

IN February 2007, a young politically active monk was found dead at the Tronum Chhroeung pagoda in Kandal province: His throat had been slit.

The body of the monk, an ethnic Khmer born in Vietnam named Eang Sok Thoeun, was discovered the morning after he had taken part in a demonstration at the Vietnamese embassy in Phnom Penh protesting the treatment of ethnic Khmers in southern Vietnam - a group known in Cambodia as Khmer Krom, or Southern Khmer.

Police declared his death to be suicide and disposed of his body without further investigation. Rights groups and Khmer Krom activists suspected his murder was politically motivated.

This Friday, Khmer Krom clergy will gather at Wat Samaki Reangsay, their spiritual base in Phnom Penh, to commemorate the second anniversary of Eang Sok Thoeurn's death.

The commemoration comes on the eve of a much larger forum to address what rights groups and Khmer Krom activists describe as a persistent and often violent campaign by the Vietnamese and Cambodian governments to stifle the rights and distinct identity of the ethnic group.

Pledge of action
Two centuries ago, what is now the southern delta of Vietnam was part of the Khmer Kingdom. Vietnam says one million ethnic Khmers still live there. Khmer Krom leaders put the number 10 times higher and claim a further 1.5 million Khmer Krom have migrated to Cambodia.

Abuses against Khmer Krom by the Vietnamese state will be raised at the United Nations Human Rights Council in May, according to local rights officials.

In meetings with the UN's special rapporteur on human rights defenders, Margaret Sekaggya, and the UN refugee office in Bangkok last month, Ang Chanrith, executive director of the Phnom Penh-based Khmer Kampuchea Krom Human Rights Organisation, was told the international body would call on Vietnamese officials to defend charges against its treatment of Khmer Krom and Montagnard hill tribes, as well as other indigenous groups.

"She said she would take action on the situation and that our case would be presented," he said, adding that the UN High Commissioner for Refugees (UNHCR) in Bangkok had also agreed to revisit past reports of official violent suppression received from Khmer Krom seeking asylum in Thailand. He said the UNHCR had previously not been receptive to these reports.

The news has renewed hope for Khmer Krom activists. For Young Sin, president of the Khmer Krom Buddhist Monks Association and a former teacher of the slain monk, the United Nations may be able to exert leverage over Vietnam in a way that regional groups cannot.

"If the UN intervenes and puts pressure on the Vietnamese government, it wouldn't dare continue carrying out the kinds of repression it has inflicted on the Khmer Krom people," said Young Sin, who is also abbot of Wat Samaki Reangsay.

A history of violence
Just how politically sensitive the topic is can be judged from the responses from Cambodia and Vietnam to a comprehensive report by Human Rights Watch (HRW) on the subject. Released last month, the report stated that Khmer Krom monks in Vietnam seeking greater religious and personal freedoms had been unfairly threatened, defrocked and imprisoned. In Cambodia, the rights group said, activist Khmer Krom monks have been deported to Vietnam.

The report - "On the Margins: Rights Abuses of Ethnic Khmer in Vietnam's Mekong Delta" - tracked escalating tensions between Khmer Krom and the authorities on both sides of the border.

Hanoi's Foreign Ministry spokesman Le Dzung rejected the report as a "total fabrication", and said freedom of speech and religion in Vietnam were constitutionally protected, the state-controlled Viet Nam News agency quoted him as saying. A spokesman for the Vietnamese embassy in Phnom Penh also rejected the report, saying that his government did not discriminate against any of its 54 official ethnic groups.

HRW also accused the Cambodian government of abetting Vietnam, "a close ally", to suppress the voices of Khmer Krom who flee across the border to Cambodia and advocate for greater freedoms for their communities.

Rights advocate Ang Chanrith corroborated the charge, saying the Cambodian government allows Vietnamese agents to operate locally: "We often see Vietnamese agents at our gatherings. They wear plainclothes and videotape us in order to identify the monks who attend demonstrations. They speak Vietnamese to each other, and our demonstrators see them often and can now recognise them."

Reaction from the Cambodian government to HRW's report was unsympathetic. Religious Affairs Minister Min Khin declined to comment, while Minister of Information Khieu Kanharith rejected the report's findings, saying "criticism by civil society groups of the [Cambodian and Vietnamese] governments does not help protect the Khmer Krom".

"They don't know anything. They work only for money," he added. "But the Cambodian government works peacefully with Vietnamese authorities for the prosperity of the Khmer Krom."

Reporting in the Cambodian press was mixed. The major newspapers affiliated with the ruling Cambodian People's Party, such as Rasmey Kampuchea and Kampuchea Thmey - did not mention the HRW report, saying they did not receive it. Opposition-affiliated papers did.

Um Sarin, president of the Cambodian Association for the Protection of Journalists, said fears of government disapproval drove some newspapers to ignore the scathing report.

"Khmer Krom live in poverty, and their identity and religious practices have been destroyed," said Thach Setha, head of the Khmer Kampuchea Krom Community. "The Vietnamese government doesn't allow Khmer Krom to use the internet, to listen to Voice of America or Radio Free Asia on the radio, and has blocked our access to education."

But Ang Chanrith is confident international attention to the issue will force Vietnamese authorities to relax their treatment, if not agree to real concessions.

"We have to use international groups to put pressure on the Vietnamese government to allow Khmer Krom to exercise their rights," he said.

He recently returned from a trip to Stockholm, where he presented reports of abuses against Khmer Krom, including allegations of collusion between Cambodian and Vietnamese authorities to keep a tight grip on activists. He is banking on the UN, however, to bring results.

The human rights record of each UN member state is subjected to public scrutiny, or a Universal Periodic Review, every four years. This May, Vietnam's number is up, amid a fresh stream of criticism against its government's treatment of ethnic groups living within its borders.

Sara Colm, a senior researcher for Human Rights Watch, said that given the lack of independent oversight within the tightly controlled communist state, international organisations, including her own, submitted reports to the UN Human Rights Council detailing rights abuses in Vietnam, including the situation of the Khmer Krom. Vietnam is thought to have filed its own report to the UN over statements accusing it of rights abuses, although a spokesman for the Vietnamese embassy in Phnom Penh said he was unaware of any such response.

Brad Adams, Asia director for Human Rights Watch, said that although Vietnam has a bitter past with much of the West and remains a communist state, its integration into global markets means it needs to take international opinion into account.

"It's clear Vietnam cares about its international image, including its track record on human rights," he said. "In recent years, it has taken pride in its enhanced global standing through its admission into the World Trade Organization and its election to a two-year seat on the UN Security Council."

"The challenge now is to get the Vietnamese government to replace its rhetoric about human rights with actual progress on the ground. The government should be trying to engage in peaceful dialogue with the Khmer Krom, rather than throwing them in jail," Adams said.

Meanwhile, as the UN prepares for its review, the monks at Wat Samaki Reangsay rehearse the prayers they will chant for the soul of their slain brethren. Abbot Young Sin said threats will not deter his monks from practising their religion and fighting for others to do so. And he
rejected accusations that monks are overstepping their role as clergy.

"Buddhism is absolutely compatible with calling for peace," he said. "Advocating for the freedoms for lay people is our responsibility."