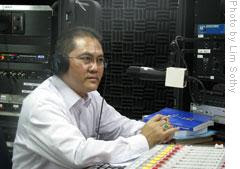 Laing Kim Seng, a lawyer for the national bar association.

“Many people are confused about that, because when there is a case, they say they have a title,” said Laing Kim Seng, a lawyer in the national bar assocation, as he described legal procedures in civil cases.

A sharp rise in land prices in recent years has led to an increase in land disputes and thefts, while many displaced say they were victims of corrupt sales or the turning of public property into private assets.

Laing Kim Seng said an inventory should exist for public property, and a switch form public to private ownership is illegal.

People have a right to complain to the courts in such cases, he said.
Posted by CAAI News Media at 7:56 am