The ambiguous legacy of March 18 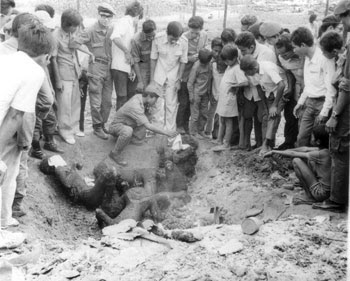 ON the anniversary of the coup d'etat that overthrew Prince Norodom Sihanouk and ushered in the ill-fated Khmer Republic, overseas Cambodians have staked claims to the regime's ambiguous legacy, reopening a transcontinental debate about the lessons and meaning of the coup.

Wednesday marked 39 years since the overthrow of Prince Sihanouk and the imposition of an anti-communist regime that ruled until its overthrow by the Khmer Rouge in April 1975.

The men who led the coup, General Lon Nol and Prince Sisowath Sirikmatak, attempted a bold experiment in Khmer democracy, abolishing the Cambodian monarchy and putting in place a US-style presidency.

Sandwiched between the velvet-gloved authoritarianism of Sihanouk's Sangkum Reastr Niyum and the horrors that came after, the regime has tended to be overlooked by Western historians, but interviews with Lon Nol-era officials and their relatives revealed that March 18 is a political battlefield every bit as active as January 7 - the day officially celebrated each year as the "liberation" from the Khmer Rouge.

In a statement Wednesday, the US-based Cambodian Action Committee for Justice and Equity expressed "an immense debt of gratitude" for the sacrifices of those who defended the Khmer Republic against Vietnamese communism.

"March 18, 1970, was the day we began to stop the invasion of Cambodia by the Vietnamese Armed Forces, the Vietcong and Hanoi Army in connivance with Cambodian clans of traitors," the statement said.

Khmer Mchas Srok, another diaspora group, also argued that the coup was a result of the "invasion" of Cambodia by North Vietnamese soldiers.

A disputed legacy
But Prince Sisowath Sirirath, second deputy president of Funcinpec and the son of Prince Sirikmatak, said that the coup - by making the country dependent on US aid - hastened the onset of communist rule.

"For me, it was a sad day when Cambodia entered the Vietnam War," he said.

"I would say [the coup] shortened the length of the Republic. When the US decided to withdraw its forces ... it made the victory of the Indochinese communists much quicker."

Speaking about the role of his father, who was captured and executed by the Khmer Rouge in 1975, Prince Sirirath was more pensive.

"Like any good child, one cannot brag about one's father. I would just say that it was his destiny to perform that deed and be in that position on that day," he said.

Son Soubert, a member of the Constitutional Council and the son of Son Sann, a prime minister under the Sangkum regime, said the coup was certainly a reaction to Vietnamese communist escalation on Cambodian soil, including territorial encroachments.

But he said his father never agreed with the coup, advocating a policy of reconciliation between Cambodians on either side of the Cold War divide, and that the dependence on US aid doomed the republican experiment.

"I don't think [the coup] achieved anything because as long as we lose our independence we are pawns. We are not free," he said, adding that the Sangkum era offered more chances of preserving the peace.

"We were independent. We were able to say things and we were listened to."

But others said there was an element of idealism to the coup, reflecting deep-seated problems in Cambodia.

"I believe that the Khmer Republic lifted up the people, elevated their pride as nationalists. They did things that no other country at the time would have done," he said. "And I have to give them credit for that."

Ros Chantroboth, deputy director of Cambodia Royal Academy and author of a book on the regime, said that prior to 1970, the government was accused by many of economic mismanagement, inhibiting freedom of expression and turning a blind eye to the NLF forces operating in border areas.

"The March 1970 coup was a result of unhappy civil servants, youth and other people, [who] let responsibility fall on Norodom Sihanouk," he said.

However, Ros Chantroboth said the new regime was staffed by Sangkum-era officials and doomed by the same weaknesses as its predecessor.

"For two years, the corruption and injustice were controlled but started to reassert themselves in 1973 when old officials came to power," he said.

"The March coup just changed the image of the regime. I think that if Sihanouk had played an important role, the civil war in Cambodia would not have exploded across the country because people believed in him."

Justin Corfield, historian and author of Khmers Stand Up: A History of the Cambodian Government, 1970-75, said that there was certainly an idealistic element to the Republic - especially from Prince Sirikmatak - but that it ended up taking an unexpected turn.

"One could say that the events of 1970 did polarise the Cambodian population more so than ever before, and transform the system of political accommodation that Sihanouk had practised so well during the late 1950s and early 1960s into one of confrontation," he said by email.

But in the final analysis, disagreements over March 18 seem inevitable in a country that has long had irreconcilable attitudes towards both the Khmer Rouge and the encroachments of its Vietnamese neighbour.

Youk Chhang, director of the Documentation Centre of Cambodia, said that arguing "what if?" would not lead to constructive solutions, but recognised why the question and others similar have continued to animate Cambodian political debate well into an era of relative peace and stability.

"Cambodia is a fragile society and therefore people are divided," he said.

"This is because they care so much about the future, and because they have also suffered so badly in the past."
Posted by CAAI News Media at 12:02 am