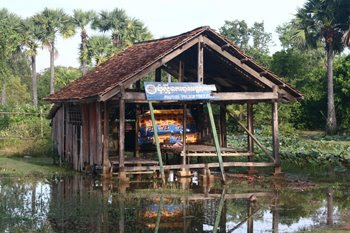 May 17 will see the creation of new district and provincial councils designed to disperse power and improve the quality of local governance, as observers question if rhetoric can become reality

WHEN Cambodia's 11,353 commune councillors go to the polls on May 17 to elect members to the country's new district and provincial councils, they will put the final touches on a program of reform that will see a far-reaching restructure of local government.

But while the government's decentralisation and deconcentration (D&D) reforms have at times been obscured by the noisy routines of party politics, they have the ability - in theory, at least - to redraw the lines along which Cambodia's political battles are waged.

As a model, decentralisation involves the transfer of administrative duties to newly elected sub-national entities. Deconcentration, a related but distinct process, involves the delegation of power from the central government to its representatives at lower levels.

While observers and stakeholders interviewed by the Post agreed that D&D was a step into the unknown for Cambodia - a country with an engrained tradition of top-down rule - they voiced a variety of opinions as to how closely the reality of D&D would match the theory.

D&D took its first concrete steps in 2002, with the direct election of the Kingdom's 1,510 commune councils to be supplemented by the formation of similar governing bodies at the district, provincial and municipal levels following May 17.

Instead of the present centralised system, in which policy is determined by the line ministries in Phnom Penh and then delegated to provincial departments and district offices, D&D aims to create a "unified administration" at the sub-national level, allowing each council to create their own development plans and manage finances accordingly.

With the full implementation of the April 2008 Organic Law - the government's D&D blueprint - councils will function as an elected "parliament" at each level, matched by a board of centrally appointed governors and deputy governors - a rough analogy of the national cabinet - that will carry out its policies.

"Currently, it seems that all the implementation is done by the central level, not really by their own offices or departments at district level," said Ngan Chamroeun, deputy director general of the Ministry of Interior's General Department of Local Administration.

"We need to find a way to create a unified administration at the local level."

Mixed motives
However, predicting the benefits of such a complex reform is a challenging task, even for those closely involved.
Thida Keus, executive director of local rights group Silaka, which is involved with the reforms, cited both donor pressure and a genuine desire for reform as the motives for D&D.

General administrative confusion had crippled action on many pressing issues, she said, adding that a frequent conflict between national laws and ministerial prakas prevented effective implementation.

"The national government can make laws, but they cannot manage them because the local authorities are not collaborating, and there are players at the national level that have no accountability," she said.

Chith Sam Ath, executive director of the NGO Forum on Cambodia, said the D&D reforms could create a system that successfully balanced the power of governors with councils, but said the process should be more transparent and representative in order to avoid the creation of "political party councils".

"So far we can see that the process has increased, but the practice doesn't seem to have changed," he said.
"The importance is to bring the voice of grassroots concerns into the planning."

Local agricultural group CEDAC, which has worked since 2006 as part of anti-corruption NGO Pact International's Local Administration and Reform project, has been educating citizens in Kandal and Takeo provinces about the workings of commune-level government, with local officials reporting positive effects from the first stages of D&D.

"The main objective of the project is to improve the engagement between civil society, citizens and the commune councils," said Yi Kim Than, a CEDAC program officer based in Kandal.

He said that with the appropriate education - such as disseminating information about local government and holding public forums in which villagers can air grievances to commune councilors - CEDAC was able to help strengthen relations between officials and locals.

"People raise the concerns they are facing, and afterward the commune council tries to solve them," he said. "Sometimes the district governor also comes to meet the people."

The effectiveness of the more distant district and provincial councils would depend on education, Yi Kim Than said, but would depend also on the political will of CPP leaders, who may try to take credit for D&D-initiated state projects such as new infrastructure.

"How far the ruling party benefits from [D&D] depends on the knowledge and the awareness of the people," he said.

State vs party
According to some observers, this tension - between the centralised ruling party and the decentralised state - could well determine the success of D&D. Indeed, civil society groups have already argued that the "indirect" nature of the May elections itself runs contrary to the goal of more responsive government.

On February 26, local election monitor Comfrel issued a report slamming the indirect council elections as a "foregone conclusion", since members will almost certainly vote for their own party's candidates.

Stephen Ehrentraut, a researcher and consultant with experience in D&D issues in Cambodia, said similarly that the dominance of the CPP at all levels of government would block the further entrenchment of democratic norms.

Although he saw "encouraging trends" in those communes in which there were competitive local elections, he said the exercise of local power depended heavily upon the attitude of the CPP's central leadership.

"In the vast majority of communes in which the council and village chiefs are controlled by the ruling party, what is called decentralisation does not effectively devolve powers to lower levels of the state and contributes little to meaningful democratisation," he said.

The indirect May 17 elections, he added, were more likely to entrench loyalty to CPP rule than they were to democratise the political system.

Ngan Chamroeun said that although political scientists had documented the use of D&D as a way of legitimising undemocratic regimes in Asia, Africa and Latin America, the cost and effort of conducting elections based on universal suffrage in Cambodia would require the diversion of a large amount of funds.

"For direct elections selected by the people, where would we find the money? In this country, we need to spend money on a lot of other problems, like how to reduce poverty," he said. "[The commune councilors] are still the representatives of the people."

Amid conflicting claims for the reforms, Thida Keus said it was important to remember that D&D could very well be driven by a mix of motives, and that some recognition should be given to the government for initiating the reforms at all.

"We have to give some credit to them: They want to set up the structures for better management and better accountability, so services can better reach the people," she said.

"There are also positive forces within the CPP who want real reform. This is something that will help Cambodia manage social services and governance, and that should help contribute to better governance and better service to the people."
Posted by CAAI News Media at 10:33 pm