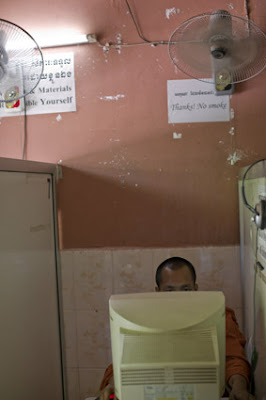 Mid-February, the news was broken and circulated by most economic media in France: Alcatel-Lucent was chosen by Chuan Wei to set up a national WiMAX Rev-e network in Cambodia. The new technology, somehow the big sister of WiMAX Rev-d already operational in Cambodia and used by many Internet Service Providers (ISPs), would not just allow a simple home connection in a restricted perimeter of a few hundred yards – like Wi-Fi (wireless transmission) in a slightly more powerful version – but would also allow users to access the Web via a high-speed wireless connection, and move around, for example out in the street, thanks to a mobile phone or a laptop computer. Thinking with optimism, Chuan Wei even plans to gather a million subscriptions in the space of two years, starting with the launching of services in mid-2009. The thing is, WiMAX Rev-e seems idyllic and some Internet specialists in Cambodia prove more than cautious towards this new telecommunications technology. For instance, having to equip oneself with a modem or the appropriate equipment that would support WiMAX technology might not be on the plus side of the newcomer. Besides, some point out that this technology might be difficult to set up if in the end, the connection is bound to be worse than regular DSL or fibre-optic broadband Internet. On a developing and much competitive market, the struggle affects technologies as much as the world of communications.

On February 17th 2009, outside the GSMA World Mobile Congress in Barcelona (Spain), the French telecommunications corporation ALU Alcatel-Lucent announced that Chuan Wei selected them for the deployment of the first national WiMAX Rev-e network in Cambodia. The French specialist in telecommunications will then be in charge of putting up all the antenna towers allowing the relay of micro-waves that will eventually provide high-speed wireless Internet. ALU became a specialist in such missions after taking part in numerous operations in developing countries. Chuan Wei Ltd, created in 2008 by Thaï Boon Roon Ltd Conglomerate, is the only one who obtained the necessary operating licenses from the government. The company will happily operate the service and forecasts the launching of its services in the Khmer Kingdom in mid-2009, and plans to reach no less than a million subscribers in two years!

The bet is very ambitious, to say the least. “I am curious to see where they’ll find them”, says Xavier Lafut, the director of the company AsiaForm , specialising in the development of communications solutions. In the country, there are currently about 20,000 subscribers and some 150,000 people use Internet cafes. To me, the number of people who could potentially sign up is more around 200,000 people, no more than that...”

Optimism is the rule for last-minute WiMAX believers
However, one cannot but notice that optimism is the rule at ALU Alcatel-Lucent and Chuan Wei. “Being the first provider to deploy a national WiMAX Rev-e network in Cambodia, Chuan Wei will contribute to the future of communications in the region. The network will considerably help the country’s economic growth by improving communications and allowing local and multinational companies to develop”, Chuan Wei president Alan Khov declared.

“We think that the market of wireless DSL will greatly develop within the next five years and more, all over the world, since close to 90% of WiMAX Rev-e subscribers will use that service by 2013”, said Mike Iandolo, president of Alcatel-Lucent’s wireless networks activities. It is true that at first sight, the offer looks tempting as anyone, thanks to WiMAX Rev-e, will be able to connect to high-speed wireless Internet from anywhere. “With its antenna towers, WiMAX Rev-e can reach a range of 50 kilometres and cover isolated zones, in big towns as in port towns. Installation is very easy since we can plant these towers anywhere. It is therefore ideal for a country like Cambodia”, ALU claims.

Mixed feeling among experts
“That is all very well to offer such a technology and it is true that from a distance, everything about it is appealing, but all the same, those services need to be accessible, i.e. you need to have the appropriate equipment”, Xavier Lafut says, without however trying to be a spoilsport. Indeed, one of the main objections to WiMAX development lies in users’ need to have a special modem or at least some equipment that is compatible with this new technology. In order to enjoy it fully, subscribers will either need a modem-type terminal box, conform to that standard, into which they will plug their computer (to transfer data or access the Internet) or their own mobile phone (to make calls via the VoIP technology (Voice over Internet Protocol)), or even via a specific USB flash drive which allows the use of a laptop computer in a nomad handheld mode.

Alcatel-Lucent is confident that the hurdles will not be too difficult to surmount: “It is planned that PCs sold in Europe and in the rest of the world will progressively integrate, in turn, a WiMAX chip, which will allow users to avoid the burden of equipment”. “For the time being, all PCs are far from having the WiMAX chip in them”, Xavier Lafut says. “Cambodians cannot afford those equipments. I think that the operator will have to provide it with the subscription for it to work out.” The possibility is not ruled out yet.

Mobile phones and WiMAX: an innovation in a not-that-near-future?
As for the use of WiMAX Rev-e on mobile phones, this idea still belongs to the future. Indeed, as it is the case for PCs, phones with a built-in WiMAX chip will be the only ones to be compatible with the WiMAX technology. “Most of the equipments for mobile phones, especially the MID (Mobile Internet Device) or UMPC (UltraMobile PC) ones are still just prototypes. They will be progressively available by late 2009 or 2010”, Xavier Lafut reckons. Just like for every new little state-of-the-art technological gem, this technology will most likely reach sky-high prices, which as a consequence might make it unaffordable to a wider majority of Cambodians.

“For WiMAX, development perspectives are severely limited by the lack of PCs as well as low purchasing power and the increase in the use of cellular services”, as explained by computing science expert Mark Heath , back in 2006, in a report released by the British research and consulting firm Analysys-Mason. Cellular telephony is a lot more appealing for most people living in this country, since phones are available at very good prices.”

Little reaction on the part of service providers
On the side of ISPs operating in Cambodia, comments are not on the agenda. Only one provider accepted to react on the topic, without citing his name. He has been in Cambodia for ten years and his manager says he is very doubtful as to the arrival of WiMAX Rev-e technology: “The national arrival of WiMAX Rev-e in Cambodia doesn’t worry me at all. First, I don’t understand how Alcatel-Lucent are going to install new antenna towers when it is now forbidden to build such infrastructures”, he explains. “This is non-symmetrical norm (256Kb/s upstream, 64Kb/s downstream), so it is bad for file sharing. Besides, it might interfere with the existing Wi-Fi network. Then, the problem of WiMAX is that it cannot support high speed, when the development of Internet services in the region requires 10Mb/s, which WiMAX cannot provide. Around 2011, the average need in terms of bandwidth will be 1Mb/s and in 2012, between 3 and 6 Mb/s. There again, it is an impossible mission for WiMAX. How will the world of enterprises possibly take interest in it if there are few possibilities like that? But this is what they are aiming at: 80% of Cambodian companies! Only a fibre optic network could allow such speed.”

What are the solutions for the Internet in the near future?
Today, many solutions do exist for all those who simply wish to surf the Web or access their email account. Many ISPs such as Online, Angkornet or Ezecom offer WiMAX Rev-d for limited use, since the coverage only applies to a few square kilometres. Today in Phnom Penh, any Internet user can find a subscription for about 40$, when the average subscription used to be 100$ per month last year. The latest provider in town is QB- they allow users, for 35$/month, to surf without any time limit. However, this offer is limited to private use and geographically concentrates on the centre of Phnom Penh.

When it comes to professional use... there’s the rub: “Today, decent connections – at least for professional use like in my own company, are those using fibre optic technology”, Xavier Lafut indicates. “Indeed, DSL depends on the existing phone network, which is a problem: recurring cuts, different protagonists on the helpline in case of connection problems... And current WiMAX solutions do not allow high-speed connections: WiMAX works on 512 Kb/s at the highest but more generally on 256 Kb/s.” Prices for these professional connections are about hundreds, if not thousands of dollars.

“The problem is that Cambodia does not have its own access point”, AsiaForm director details. “ISPs must buy their bandwidth in Thailand or in Vietnam, which is very expensive. Today, connections in Cambodia are ten or fifteen times more expensive than in other countries in the region. For fares to go down again, there must also be more demand for wider bandwidth. In that way, ISPs will develop their network and speed will increase.” Most service providers are currently working on that and looking to expand their coverage zone and fibre optic network, but most remain quiet about future evolutions. WiMAX, fiber optic or DSL, it still seems a long way till Cambodia becomes an E-nation.
Posted by CAAI News Media at 12:26 am