MPs urged to act on MDGs 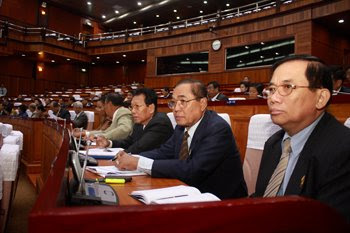 Photo by: HENG CHIVOAN
Parliamentarians were given their first briefing on Cambodia’s progress towards achieving its MDGs on Thursday at the National Assembly. The Assembly is shown here in a file photo, from its first day in session last year.

At a forum detailing gains and gaps, UN officials tout the ‘unique role’ of parliament in promoting development goals

LAWMAKERS must ramp up their involvement in Cambodia's effort to achieve the Millennium Development Goals (MDGs) if all targets are to be met by 2015, particularly in light of the escalating economic crisis, UN officials said during a forum held Thursday at the National Assembly.

The MDGs, which cover everything from poverty to environmental sustainability, were created for developing countries in 2000. They were localised in Cambodia in 2003, with final targets set for 2015.

In his remarks, Broderick expressed concern that the economic crisis could potentially derail the entire effort, a point echoed by other UN officials.

"Because of the economic crisis, there is a risk that we're going to get off track," said Susan Cowley, senior parliamentary adviser for the United Nations Development Program (UNDP).

For this reason, she said, officials throughout the region are looking to engage with a range of parties that so far have had little to do with the MDG effort.

Until now, she said, "Parliamentarians have been some of the stakeholders that haven't been challenged to get involved."

Parliament and the MDGs
Broderick said lawmakers have "a unique role to play" in helping Cambodia achieve the MDGs and urged them to promote legislation that would advance the goals and ensure that MDG-related programs are run efficiently.

The forum included a presentation from Nerissa Corazon Soon-Ruiz, a Filipino politician who chairs a parliamentary committee devoted to the MDGs. As she described her experiences in the Philippines, she stressed the importance of developing a legislative framework that would facilitate the MDG effort.

"Without it, it will be a long shot to meet the MDGs, if not totally impossible," she said.
There is no comparable MDG-centred legislative commission in Cambodia. Responsibility for individual targets was delegated to pre-existing commissions.

Soon-Ruiz said the lack of awareness about the MDG effort among parliamentarians in Cambodia and elsewhere could impede progress.

"The awareness of the MDGs among many legislators is not yet sufficient," she said. "Probably half of you came over today thinking, ‘MDG? What is that? Is that like ABC? DEF? MDG?'"

Cowley said she believed the awareness of some Cambodian parliamentarians was high, particularly those involved in gender rights and health issues.

As for the group as a whole, she said, "I think it's a continuing process to reach out to MPs and provide them with more information, particularly about where we are now."

Thoam Bun Sron, a Funcinpec senator and vice chairman of Senate Commission 7, dealing with education, youth and sport, said he believed parliamentarians would, as a result of the forum, "urge the government to increase its effort to reform the public administration" in a manner that would promote the goals.

Khloth Tongphka, a Funcinpec senator and chairwoman of Commission 8, dealing with health, social work and women's affairs, said a collective effort would be necessary to meet the goals.

"We need to demand that all the authorities and people join together to accomplish this," she said.
Cowley, too, described this type of heightened involvement as essential.

"If everybody doesn't pull together right now, 2015 is just a pipedream," Cowley said.
Broderick took a more optimistic line, saying, "The goals are ambitious. But they are also achievable."
Posted by CAAI News Media at 10:45 pm