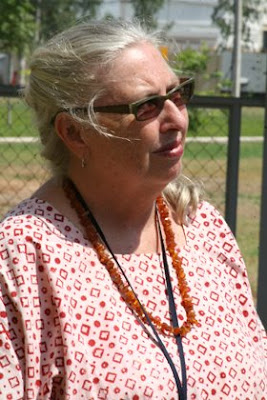 ECCC's head of Victims' Unit under fire from defence teams.

THE DEFENCE team for Khmer Rouge foreign minister Ieng Sary on Thursday registered concerns about the recent appointment of former tribunal spokeswoman Helen Jarvis as head of the court's Victims' Unit, arguing in a letter dated June 4 that her new duties conflicted with her outreach responsibilities.

The letter, addressed to the court's Deputy Director of Administration Knut Rosandhaug, also calls for an administrative inquiry into allegations that Jarvis's expressed political views could compromise her work at the court. In addition, it points to a book Jarvis co-authored in 2004 that the defence team said "strongly implies that Dr Jarvis has preconceptions about the alleged crimes", namely that they constituted genocide.

The bulk of the letter, though, concerns the conflict that will allegedly arise when Jarvis, who became head of the Victims' Unit last Monday, combines the responsibilities of that role with her outreach work.

"We are firmly of the view that amalgamating outreach activities of the entire court together with the interests of the Victims' Unit creates an inescapable conflict of interest for Dr Jarvis through no fault of her own," the letter states.

In an interview Sunday, co-lawyer Ang Udom said the switch from court spokespwoman to Victims' Unit chief amounted to a switch from an objective administrator to active party, making it impossible for her to impartially perform outreach duties.

"Jarvis used to work just with the administration," Ang Udom said. "But when she becomes chief of the Victims' Unit ... she becomes very active in the court process. She is a party in the court."

"The trouble is, I think that the court has done a pretty bad job of explaining what her outreach roles will encompass," Ianuzzi said.

Court spokesman Reach Sambath said Sunday that court officials had, before making the appointment, concluded that they could avoid a conflict by limiting Jarvis's involvement in outreach to what he termed "micro-outreach".

But the May 18 press release announcing the appointment states: "Dr Helen Jarvis will continue to have oversight of [outreach] work."

Ianuzzi said the distinction between "macro-outreach" and "micro-outreach" was not made at the time of the announcement, adding that he had never heard of it before.

He said he had no problem with Jarvis performing outreach duties that were restricted to her role as head of the Victims' Unit.
Jarvis declined to comment Sunday, saying she had not seen the June 4 letter.

Past writings
Concerns about Jarvis's political views were raised last week by Nuon Chea's defence team, which singled out a 2006 open letter signed by members of the Democratic Socialist Perspective's Leninist Party Faction, including Jarvis.

The letter states: "Against the bourgeoisie and their state agencies we don't respect their laws and their fake moral principles."

Karnavas said via email: "If she has made those comments and if she is an unrepentant Marxist-Leninist with views that are antithetical to the founding laws and principles of the Cambodian Judicial System, then, at a minimum, the inevitable perception that will arise whenever she is called upon to make an important or difficult decision is that she is promoting her revolutionary agenda."

Ianuzzi said the idea of an administrative inquiry was "probably not a bad idea".

Reach Sambath declined to say whether an administrative inquiry was underway.

The June 4 letter also singles out a book Jarvis co-authored in 2004 with the British journalist Tom Fawthrop titled Getting Away with Genocide: Cambodia's Long Struggle Against the Khmer Rouge.

The Ieng Sary defence team argues in the letter that the use of the word "genocide" calls into question Jarvis's "absolute impartiality", a requirement for spokespersons, which the letter argues has been established at other tribunals.

Karnavas said the book indicates that Jarvis "holds some strong opinions which ... call into question her objectivity".

Ianuzzi, who said he had not read the book, seconded that charge, saying, "Certainly it sounds like she has made up her mind about the fact of a genocide."