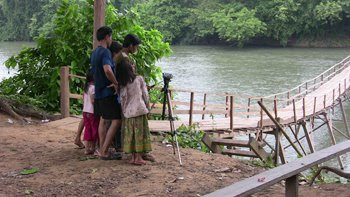 The Lower Sesan 2 hydropower dam is to begin construction in 2010, but a new report and community video highlight its potentially deleterious effects on local communities.

GROUND has not yet been broken on the Lower Sesan 2 dam - Cambodia's largest planned hydropower project - but already the dam is casting a shadow upstream and downstream from the proposed site, with villagers claiming they will face social and environmental upheaval as a result of the project.

The 480-megawatt dam, slated for construction on the Sesan River in Stung Treng province's Sesan district, has prompted five communities in Stung Treng and Ratanakkiri to produce a 20-minute video outlining their concerns about the US$662 million project, expected to begin construction next year.

"We absolutely oppose the planned dam because there are likely to be a lot of negatives for us, including increased flooding, the loss of farmland, houses, schools [and] pagodas, and decreased fish yields," said Beang Teang, 53, who represents 325 families in Sesan district's Sre Kor village.

Beang Teang, one of five local representatives who delivered copies of the video to government ministries and the Vietnamese Embassy in Phnom Penh on Friday, said he hoped it would effectively express the simmering opposition to the project.

Daniel Lanctot, a community media trainer who provided support during the video's production, said the project, which consists of three- or four-minute statements from each village, would allow them to speak more directly about the likely effects of the dam.

"The main reason for making the video was to provide an outlet for the communities' concerns to be made more public and to be something that they would feel empowered by," he said Friday.

Chhoeum Sokea, 39, from Stung Treng's Kbal Romeas village, added that seeing the people voice their concerns directly might prompt the government to "consider the impacts" of the project and take action to alleviate them.

Thousands affected
The villagers' concerns are reflected in a new report from the Rivers Coalition in Cambodia, which claims the dam's proposed location - 1.5 kilometres from the confluence of the Srepok and Sesan rivers - will create "serious negative environmental impacts" on two of the largest rivers in the Mekong River Basin, impacting river ecosystems as far afield as the Tonle Sap Lake and Vietnam's Mekong Delta.

The report, which is yet to be released, estimates that 78,000 villagers upstream and downstream from the dam site will lose access to migratory fish, and that "tens of thousands" will be vulnerable to changes in hydrology and water quality resulting from the project.

"The Cambodian government should carefully consider whether the project should be built, or if the costs to local people, biodiversity and the country more generally are so high as to make the dam economically, environmentally and socially unattractive," states the report.

Tep Bunnarith, executive director of the Culture and Environment Preservation Association, added that the reservoir of the dam, which is being built by the Vietnamese state-owned Electricity of Vietnam (EVN), would flood as much as 394 square kilometres of forest, forcing the relocation of between five and seven villages.

A worrying precedent
The RCC report also cites the 720-megawatt Yali Falls dam on the Sesan River in Vietnam's Gia Lai province - also built by EVN - as a "vivid example" of the side effects of major hydropower projects.

Huon Kalib, 55, a people's representative for four districts in Ratanakkiri, said that in the past few years three relatives and one neighbour of his have drowned in flooding caused by water releases from the dam, and that community farmland has been submerged by floods since February this year.

"Each year, we have lost farmland, people, cattle, pigs, chickens and other animals due to the floods causing by the Yali Falls dam," he said.
Carl Middleton, Mekong Program Coordinator of International Rivers, a US-based advocacy group, said that the high-risk nature of hydropower dams necessitates a close working relationship with the communities likely to be affected. 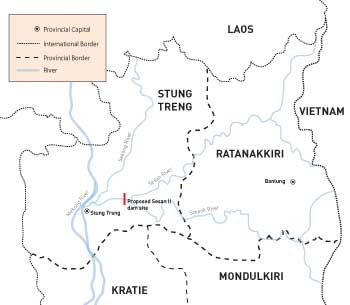 "The experience to date on the Sesan River, in the wider Mekong region and around the world is that dams destroy rivers and the lives of those depending upon them," he said by email.

He added that the current project, in addition to the dams already existing on the Sesan, would make local fisheries-based livelihoods "almost impossible", and that most of those affected by the dam developments would remain worse off than before.

"It is now widely recognised that for development to be equitable and sustainable there must be public acceptance of key decisions, especially for high-impact and high-risk infrastructure projects such as hydropower dams," he added.

EVN Vice President Lam Du Son could not be reached for comment Sunday, but Pich Dun, secretary general of the Cambodia National Mekong Committee, said Sunday that due to its size, both his organisation and the Cambodian government had requested that the Vietnamese company to "thoroughly and clearly" study the impacts of the project.

Bun Narith, deputy general director of the Department of Energy at the Ministry of Industry, Mines and Energy, said that Vietnam's Power Engineering Consulting Joint-Stock Company 1 was handling the feasibility study for EVN, but did not comment further.

But the RCC report claims that in the course of the feasibility study, researchers have visited only a "small number" of the villages likely to be impacted by the dam, and that the Environmental Management Plan included in the study, which has yet to be finalised, would likely be hampered by "a lack" of public consultation.

Chhoeum Sokea agreed, saying that although government and EVN officials have met with residents twice to discuss their removal from the area, villagers were still being kept in the dark about the project.

"So far we have not yet received clear information relating to compensation from the government and the project owner," he said.

"If the government still wants to build the dam, it's up to them, but we request fair compensation."
Posted by CAAI News Media at 11:03 pm