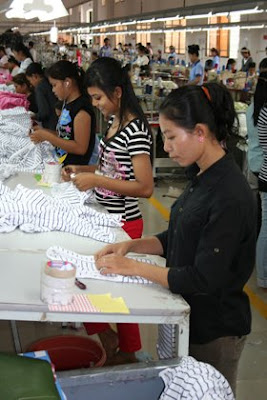 Photo by: George Mcleod
Cambodia’s garment exports have fallen for each of the last five months, according to Commerce Ministry data.

Ministry of Commerce figures show fifth consecutive month of decline in March as exports fall 38pc, a sharper fall year-on-year than in February

GARMENT sector representatives are attending a regional trade fair in China this week in an effort to drum up orders and attract new investors as Commerce Ministry figures released Friday showed exports declined for the fifth straight month in March.

Exports were down 38 percent year-on-year to US$164.3 million in March, the latest month for which reliable figures are available, dragging exports for the first quarter down 26.4 percent to $534.6 million, according to the ministry's Trade Preferences Systems Department.

The department records all exports under the generalised system of preferences (GSP) and most favoured nation (MFN) schemes, through which Cambodia exports almost all its garments, textiles and shoes. The schemes allow the world's least-developed nations to avoid quotas imposed by richer countries on exports from developing countries.

Roger Tan, secretary general of the Garment Manufacturers Association of Cambodia (GMAC), said the official figures were not surprising. "Everybody expected a decline," he said. "It was just a question of how much."

He said he hoped delegates attending the China Kunming Import and Export Commodities Fair would return with fresh buyers and new investors after preaching the benefits of sourcing from Cambodia.

"We are there to expose our products to potential buyers and make people aware of Cambodia," he said. "We need to diversify our markets, but buyers also need to diversify their sources of garments and we need to show that we can compete for those orders."

About $25 billion in trade and investment contracts are signed each year in Kunming. The government and private sector delegation was led by Minister of Commerce Cham Prasidh and GMAC President Van Sou Ieng.
The March decline comes after garment exports fell 18.6 percent to $189.21 million in February, 20.89 percent in January to $181.09 million, 13.64 percent in December to $222.1 million and 0.89 percent in November to $218.3 million. Garment exports also fell in July and September last year.

The figures show that the United States is still the main destination for Cambodian garments, but its share fell from 72.6 percent in the first quarter of 2008 to 64.9 percent in the same period this year after exports fell 34.17 percent year-on-year to $347.2 million.

Europe's share of total exports increased from 17.3 percent to 20.3 percent over the same period after exports fell a more modest 15.2 percent year-on-year to $136.3 million.

Garment exports to Japan grew 91.51 percent in the quarter to $5.4 million, and Cambodia also continued to make gains in other markets with exports up 35.9 percent to $30.4 million to all areas other than the US, EU, Canada and Japan.

Shoe exports to these other countries, which include Russia and the Middle East, grew 513 percent to $6.5 million, while shoe exports to all countries climbed 28.3 percent year-on-year to $27.5 million.

The majority of shoe exports still went to the EU, which imported 3.8 million pairs of shoes worth $14 million over the first three months, though this was down 4.1 percent on the first quarter of 2008.

Commerce Minister Cham Prasidh could not be reached in Kunming for comment over the weekend, but he told the Post last month that export orders over May and June would provide a strong indicator of the sector's prospects for the rest of the year as these coincided with the start of the "hot season" in the US and Europe.

However, official export figures for May will not be available until the end of July when the majority of garment exporters will have lodged certificate of origin applications with the ministry.

Mean Sophea, the director of the Commerce Ministry's Trade Preferences System Department, said early release of data can negatively skew the figures. This happened last month when the Post reported a 35 percent decline in garment exports for the quarter based on incomplete Commerce Ministry data supplied by GMAC that showed a 60 percent decline in March exports.
Posted by CAAI News Media at 10:56 pm