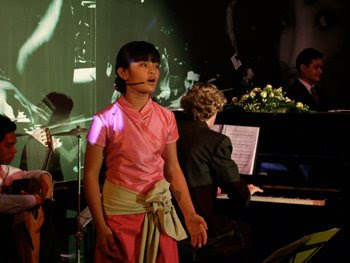 Organisers cited "supporting the Khmer arts" as the fundraiser's chief aim. However, part of the proceeds from the sold-out concert will also go to 75-year-old Em Theay, a former Ramayana dancer.

One of only a few royal court dancers to survive the Khmer Rouge regime, the renowned performer and her family lost their home, costumes and musical instruments in a fire earlier this year.

Owners of Topaz, a French restaurant on Sihanouk Boulevard, sensed a chance for some intergenerational aid.
"Bosba Panh is a talented young girl who represents a bright future for Cambodia," said Maylis Darc, managing director of the Topaz restaurant chain Thalias.

In March, Darc and local restaurateur Luu Meng co-founded the Khmer Foundation for the Arts to help artists in need, and "La Vie en Rose" marks its first fundraising initiative.

To Darc and Luu Meng, Bosba Panh seemed the right performer to pay tribute. Her family, like Em Theay's, is gradually becoming one of Cambodia's pre-eminent artistic dynasties - her uncle is the celebrated Cambodian filmmaker Rithy Panh - and she has been performing popular and classical standards since the age of eight.

Sisamouth, as well as more traditional arias by 18th-century composers. The highlight of the evening, though, was its title song "La Vie en Rose", as Bosba Panh treated an audience of 96 to her rendition of Edith Piaf's famous ode to a life in pink.

Bosba Panh has never been to France, she admitted after the show. But for this teenage student at the Lycee Francais Rene Descartes, singing about Paris was, as she put it, "pas de probleme", or "no problem".
Posted by CAAI News Media at 11:28 pm

Woah! I'm really enjoying the template/theme of this blog. It's simple, yet effective.
A lot of times it's tough to get that "perfect balance" between user friendliness and appearance. I must say you've done
a amazing job with this. Also, the blog loads extremely quick for
me on Internet explorer. Exceptional Blog!

Feel free to surf to my website; online stopwatch with sound.