Women lost ground in May polls 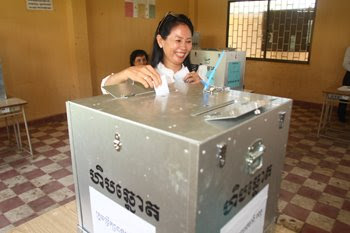 Photo by: HENG CHIVOAN
A female commune councilor casts her vote in this year's district and provincial council elections in Phnom Penh.

DESPITE decades of efforts to encourage more women to enter politics, the number of female candidates in May's local elections was nearly halved from an all-time high in 2007, National Election Committee (NEC) statistics show.

"There are very few women getting involved in politics, especially in the general election," NEC Secretary General Tep Nytha said.

In 1955, Cambodian women were granted the right to vote and allowed to stand for election. Three years later, the Kingdom's first female parliamentarian, Tong Siv Eng, was elected to the National Assembly. But real political equality has proved elusive - and recently, things have taken a turn for the worse.

"Women [politicians] still feel that they are abandoned because there are only men around them," said Nop Mareth, the only woman to be elected to the new district and provincial councils in Ratanakkiri province.

In last July's general election, only 14.8 percent of the political candidates were female, down from 27 percent in the 2003 national election, Tep Nytha said.

"Unlike in other countries, Cambodia does not have legally stipulated quotas for female candidates, so we need political parties to step up and work to encourage female candidates," he said. "We should also pass a law saying how many women candidates need to be selected."

Numbers were getting stronger at the local level, and with the country's first commune-level elections in 2002, 1,161 female candidates were ranked in the top three places on party lists. In 2007, that number leapt to 2,328, which represented about 27 percent of total candidates, Tep Nytha said.

Commune elections run on a party-list system. A voter selects a party, not a candidate. The election winners are the top-listed party members from the party with the most votes.

Local level losses
In the recent district council elections - which use an indirect party list system, so only elected commune officials could vote - only 1,177 of the 8,506 candidates, or about 13.8 percent, were female. In the provincial council elections, which used the same electoral system, 374 candidates were elected, only 37 of whom were women.

"We need at least 30 percent [of those elected] to be female in order for women to have the chance to work for their country," said Koul Panha, executive director of the election monitor Comfrel. "We know that women face many problems in society. So we think that if there are many women candidates, they can help solve these problems," he said.

According to Ros Sopheap, executive director of the NGO Gender and Development for Cambodia, chauvinism remains a problem.

"Women still don't have a proper chance to participate in politics," she said, citing a male-dominated environment in which women can feel intimated or ignored.

"Even men who want to work for women don't know much about women's problems," she said.

Despite the difficulties facing female candidates, Ratanakkiri's Nop Mareth says she is not discouraged.

"This is the first time that I have participated in the political scene," she said. "I used to work in simple places - but I am not afraid and will do my best with this new job."
Posted by CAAI News Media at 11:12 pm

Howdy would you mind letting me know which web host you're utilizing? I've loaded your blog in 3 completely different internet browsers
and I must say this blog loads a lot quicker then most.

Can you recommend a good web hosting provider at a fair price?
Thanks, I appreciate it!

Feel free to surf to my blog ... how to get lot of followers on instagram