Bringing whisky to the masses 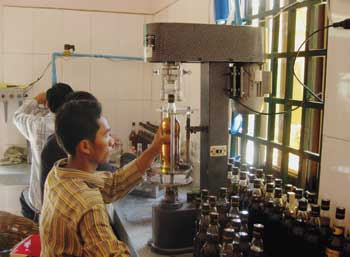 Photo by: ITH SOTHOEUTH
Workers bottle Baroso whisky at the company’s bottling plant in Phnom Penh’s Stung Meanchey commune. After a year in business, the firm has grown sales to 7,000 cases per month, says Founder Prak Ponlork.
--------------------------------------------------------------------------------
We wanted Khmer people to know what whisky is, from its taste to its quality.
--------------------------------------------------------------------------------
via CAAI News Media
Wednesday, 17 February 2010 15:02 Jacob Gold and Ith Sothoeuth
Local brand employs a foreign face to tap into Cambodia’s competitive budget spirits market
INSIDE BUSINESS --------------------------------------------------------------------------------
THOUGH they may not know his name, hundreds of thousands of Cambodians were introduced to Canadian Ryan Plaumas last year and maybe even had a few drinks together. That’s because Plaumas – a former Cambodian resident and friend of firm founder Prak Ponlork – is the human logo for Baroso Whisky, the uniquely-branded debut spirit of Phnom Penh-based EVL WiskCam Enterprises (EVL).
Since it hit the Kingdom’s shelves in January 2009, Baroso has earned the right to its mascot’s more-suave-than-thou expression.
According to EVL’s President Prak Ponlork, the company sold 500 cases of Baroso whisky in its first month on the market. As of January 2010, monthly orders have reached 7,000 cases each month and are continuing to climb.
From only a handful of retailers in Phnom Penh and among Prak Ponlork’s expat contacts in Battambang, EVL now sells directly to shops and distributors in Siem Reap, Pursat, Takeo, Kampong Speu and Kampong Cham provinces as well, with an eye toward eventual nationwide market presence.
From the tilted glass of its debonair mascot to the moment that inspired its origin, EVL’s Baroso Whisky was a brand built one sip at a time.
Prak Ponlork first encountered Scotch when he attended a joint military training seminar in Australia during his days in the Royal Cambodian Armed Forces. After a few wild nights with his new Australian buddies, he knew that one day he would “bring whisky to Cambodia”, even if Baroso resembles Scotch more in terms of its style rather than substance.
“We wanted Khmer people to know what whiskey is, from its taste to its quality. Right now, we are priced to accrue market share,” Prak Ponlork said.
So, how did a bout of Scotch-fuelled rowdiness in Australia turn into a US$2-3 bottle of 40-percent-proof rice whisky?
For that, look to EVL’s Vice President Seat Kim-Eang, a longtime friend of Prak Ponlork’s, whose technical work for a French winery afforded him the know-how and industry contacts to assemble the Baroso distillery in Stung Meanchey commune, Meanchey district, Phnom Penh. The centre is where the whisky is bottled, labelled and packaged. It also holds the company offices upstairs.
Throughout 2008, the pair experimented to develop the flavour of Baroso as well as earn safety approval from the Ministry of Industry, which gave them the green light in June.
By January last year, they had their whisky. Now they only needed customers.
With only six employees and a shoestring budget, EVL’s staff took their product directly to the people, riding around Phnom Penh on a motorbike giving out samples to potential buyers.
“At first it was hard. The shops said they didn’t need another bottle taking up space,” said Prak Ponlork.
But after tasting the product and noting the price, several carriers said “yes”. The distribution network continued to grow, largely by word of mouth and unrelenting footwork.
Now, Baroso advertises with outdoor signs and spot ads on television, the radio and in print. The highest spending for ads goes to TV spots during big kickboxing matches on Cambodian stations.
Nonetheless, it is the two faces of EVL – Prak Ponlork and Mister Baroso – that keep the brand growing.
Western look
Prak Ponlork says that the choice of a Western man to symbolise the liquor was deliberate.
“Khmer people are fascinated by something new, especially with Western things, so we decided to make this bottle interesting for them,” he said.
With its busy one-house workshop, which now employs over 40 people and uses recycled glass bottles, EVL is expanding. This January, it launched the E&L Single Label brand, which at $1.50 per bottle is even cheaper than Baroso and aimed at capturing a wider rural market.
Part of the reason that Prak Ponlork wanted to roll out a second brand just one year after launching a first one, he said, is the fun of going head to head with the lower-tier brands and outcompeting them. At the same time, he is nervous about what will happen when the demand for his products outstrips his current operation.
“The hardest thing about this business is not selling the whisky, it’s finding the capital,” he said. “We can’t take out a large enough loan because we have no land to use as collateral. We welcome any companies that want to invest and cooperate with us to make us bigger.”
Posted by CAAI News Media at 9:44 pm