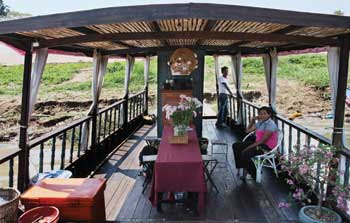 Photo by: Sovan Philong
Kim Seng, 31, and his wife, Bu Samall, 27, wait for their boat, The Butterfly, to be hired at the boat rental queue along the riverfront on Tuesday.
via CAAI News Media
Wednesday, 17 February 2010 15:03 Chhay Channyda
A GROUP of boat owners is preparing to lodge a complaint against a new association that was created to streamline the booking of trips on the Tonle Sap, accusing it of cutting off direct access to customers and charging unnecessarily high fees.
The Association of Phnom Penh Water Tourist Transport was formed late last year and began operating last month. Previously, customers could book tours through individual boat owners, but now they must contact owners through the association.
Boat owners are required to give the association US$3 for each trip. Hourly rates for the boats typically fall between $20 and $40.
Kim Seng, the owner of one of the 31 boats that operates on the river, said five boat owners would soon file a formal complaint with the association and with City Hall.
“We want the association to allow us to take our clients, as they have booked with us over the phone,” he said.
Eng Ponlork, assistant to the association’s director, defended the new system, saying it had cut down on the “anarchy” that had resulted when tourists and other prospective clients descended on the riverside to book tours, often attracting multiple boat owners offering varied rates.
“The aim of the association is to manage the riverside boats to create order, not to encourage tourist anarchy,” he said.
Another boat owner, who declined to be named, said the price increase resulting from the fee required by the association would discourage Cambodians from booking boat tours.
“For foreigners, the fee is okay for them. They bring money to spend,” he said. “But our local people complain that it is expensive, and we cannot make any money.”
Posted by CAAI News Media at 9:55 pm