US warship in Sihanoukville 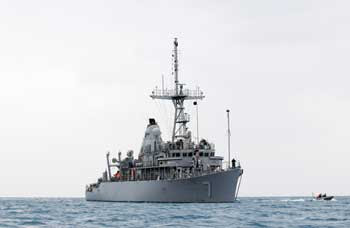 Photo by: Photo Supplied
The USS Patriot, from the US Navy’s 7th Fleet, sits at anchor in the port of White Beach, Okinawa. The ship and its crew are set this week to hold joint training exercises with the Royal Cambodian Navy.
via CAAI News Media
Wednesday, 17 February 2010 15:03 Jacob Gold
THE USS Patriot, an Avenger-class countermeasures vessel from the US navy’s 7th Fleet, made port in Sihanoukville on Monday to begin a week of joint training exercises with the Cambodian Navy, the fifth such visit by a US vessel since military-to-military interaction between the two nations resumed in 2006.
“Every visit is new, because each ship brings along its own unique capabilities,” said US embassy spokesman John Johnson. He added that this week’s disaster-preparedness exercises, including drills to counter on-ship fires and other emergencies, will mark the first time that the Cambodian Navy has received training in such areas from the US Navy.
According to a February 12 statement released by the US Embassy, “The bilateral training exercises will focus on damage control, search and seizure and at sea rescue techniques.”
“In addition”, it added, “naval surveyors who are also travelling on the ship will assist their Cambodian counterparts in taking side scan surveys of the port area to check for possible obstructions in commercial shipping lanes.”
The US-assisted survey comes as the Sihanoukville Autonomous Port gears up for a year aimed at recovering from revenue losses in 2009, which saw Cambodia’s crucial garment exports drop sharply amid the global economic downturn.
Posted by CAAI News Media at 9:52 pm