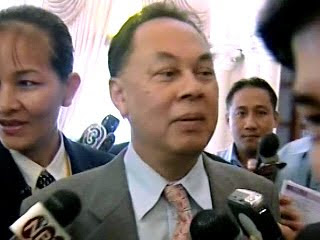 
via CAAI News Media
BANGKOK, Feb 16 (TNA) - Thai Minister of Foreign Affairs Kasit Piromya said Tuesday that the ministry is seeking to help the convicted Thai national and has submitted a request to Cambodian Foreign Ministry to permit Thai officials to meet the man who was sentenced to 20 years in jail for planting landmines along the Thai-Cambodian border.
Mr Kasit said the government had asked for cooperation from international agencies including the International Committee of the Red Cross (ICRC) and non-governmental agencies in Cambodia to contact the Cambodian Corrections Department to send staff to visit the Thai national in prison.
The foreign minister said the man is reportedly having health problems.
The international media earlier reported Friday that 39-year-old Suphap Wongpanna was sentenced to 20 years in Cambodian jail after confessing in proceedings that he had planted at least five landmines in Cambodia's Anlong Veng town near areas claimed by both countries.
The news service said that he was arrested one year ago and that the Cambodian authorities charged him with attempted murder, endangering national security and entering Cambodia illegally.
The Cambodian court record was quoted as saying Mr Suphap was arrested by Cambodian border guards just a few metres inside the country while carrying a land mine on February 27 last year
Mr Kasit added that the ministry had asked officials at Si Sa Ket province to contact his family in the province for possible assistance, which the ministry would extend under its normal procedures. (TNA)
Posted by CAAI News Media at 7:26 am