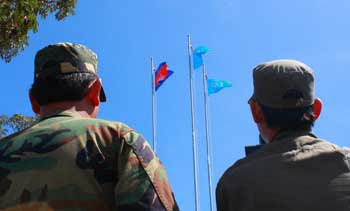 Photo by: Heng Chivoan
Troops look at the Cambodian and UN flags at Preah Vihear temple in November 2008. Hun Sen said Wednesday that he had finalised a draft for a complaint to be sent to the International Court of Justice.
via CAAI News Media
Thursday, 04 March 2010 15:04 Vong Sokheng
CAMBODIA is ready to take the ongoing border dispute with Thailand to the global stage and will do so when authorities “lose patience” with the current stalemate, Prime Minister Hun Sen said Wednesday.
Speaking at an event marking National Cultural Day, the premier said he has finished drafting an official complaint for the International Court of Justice (ICJ).
“Yesterday, I already finalised my draft to send to the UN security council,” Hun Sen said. “If it is necessary, and when I completely lose patience, then it will be immediately submitted.”
The premier’s warning continues the rhetoric concerning a disputed area adjacent to Preah Vihear temple. Hun Sen threatened to take the issue to the ICJ, the judicial arm of the UN, following a contentious trip to Preah Vihear last month.
However, it remains unclear whether the international court has jurisdiction over Cambodia’s complaint. UN members can apply to appear before the court, but the ICJ is only allowed to deal with disputes in which all concerned states have recognised its authority on a given issue.
“We don’t recognise the compulsory jurisdiction of the ICJ,” said Thani Thongphakdi, deputy spokesman for the Thai Ministry of Foreign Affairs. “It very much depends on what issue is raised.”
Instead, the two nations should settle the disagreement bilaterally using the stalled Joint Border Commission, he said.
“We continue to maintain bilaterally should be the best way of handling the issue, within the framework of the joint committee for the demarcation of the boundary,” Thani said.
Also Wednesday, Hun Sen called on local broadcasters to produce programming focusing on traditional culture and music in order to promote Khmer values, criticising TV stations for focusing on beauty contests and fashion shows. “They have completely lost Khmer culture,” he said of the stations.
The premier said he would order the Ministry of Culture and Fine Arts to boost training for traditional artists.
ADDITIONAL REPORTING BY IRWIN LOY
Posted by CAAI News Media at 9:33 pm