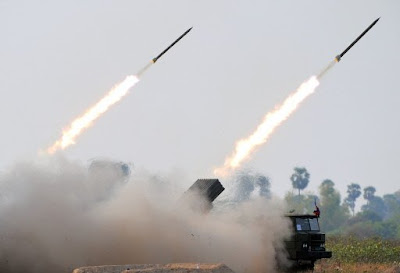 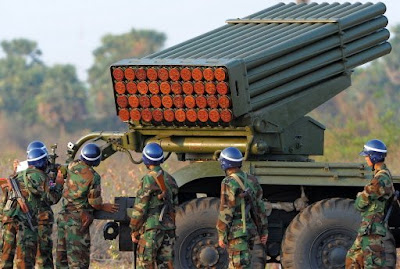 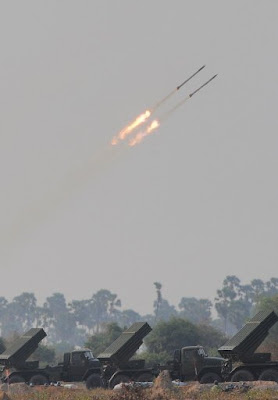 via CAAI News Media
By Suy Se (AFP)
KAMPONG CHHNANG, Cambodia — Cambodia's military mounted a rare public test of rockets on Thursday amid a lingering troop standoff over disputed territory with neighbouring Thailand.
In their first public drill since the country's civil war ended more than a decade ago, troops fired some 200 rockets from truck-mounted launchers at an airfield 180 kilometres (about 110 miles) from the Thai border.
Cambodian defence ministry spokesman Chhum Socheat told AFP the display was "not about flexing our muscles" against Thailand.
"The drill is not a threat or a show of force against neigbouring countries or foreign countries," Chhum Socheat said before the rockets were fired in front of assembled media and top brass.
Muffled thumps could be heard as salvos of rockets landed far from the launch site.
"It is about the strengthening of the abilities of our forces in order to fulfil the duties of national defence against invaders," Chhum Socheat added.
Prime Minister Hun Sen declared in a speech last week the rockets would be fired to gauge the quality of the Russian and Chinese-made Cold War-era weapons which have long lain unused in warehouses.
Cambodia and Thailand have been locked in nationalist tensions and a troop standoff at their disputed border since July 2008, when Cambodia's 11th century Preah Vihear temple was granted UNESCO World Heritage status.
Four soldiers were killed in clashes in the temple area in 2008 and three more in a gunbattle last April. Smaller flare-ups continue to be reported between troops in the area.
The Thai-Cambodia border has never been fully demarcated, partly because it is littered with landmines left over from decades of war in Cambodia, which ended in 1998.
The World Court ruled in 1962 that the temple belonged to Cambodia, although its main entrance lies in Thailand. The exact boundary through the surrounding grounds remains in dispute.
Relations plunged further in November after Hun Sen appointed ousted Thai premier Thaksin Shinawatra as his economic adviser and then refused to extradite him to Thailand, which he fled to avoid a jail term for corruption.
Thailand's government downplayed the Cambodian rocket drill and said there had been no troop reinforcements on the disputed border.
"I don't think Cambodia wants to intimidate us, as we have sent them a clear signal that we don't want the dispute to go out of control and affect people in both countries," deputy Thai prime minister Suthep Thaugsuban said.
Thai government spokesman Panitan Wattanayagorn said the drill was "nothing to do with us, they are not firing into our territory."
Posted by CAAI News Media at 10:09 pm

Hmm it appears like your site ate my first comment (it was
super long) so I guess I'll just sum it up what I submitted and say, I'm thoroughly enjoying your blog.
I as well am an aspiring blog writer but I'm still new to the whole thing. Do you have any points for rookie blog writers? I'd certainly appreciate it.


Check out my page :: bmr calculator to lose weight