..Half a Million Workers to Be Deported From Thailand 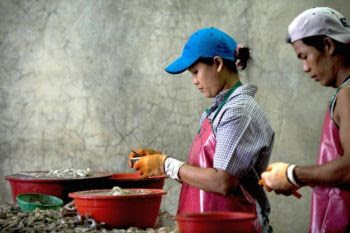 Migrant workers from Burma at work in a shrimp factory in Mahachai, on the outskirts of Bangkok. More than half a million migrants workers in Thailand, from Burma, Cambodia and Laos, face possible deportation and abuse if they fail to meet a deadline this week to register with authorities. (Nicolas Asfouri/AFP/Getty Images)
via CAAI News Media
Epoch Times Staff
Thai authorities are about to deport approximately 500,000 workers—originally from from Burma, Laos, and Cambodia—for failing to seek worker's permits before the deadline was reached, according to Thai newspaper, The Nation.
Nearly 1.3 million Burmese, Laotian, and Cambodian workers live in Thailand. They were required to submit permits by Tuesday. Gothom Arya, the chairman of the Human Rights and Development Foundation, requested Thai officials to be mindful of Burmese workers who are to be deported.
Gothom said the Burmese feel that their lives will be put in jeopardy if they go back to Burma, citing political and ethnic tensions. The rights activist added that the government should extend the deadline because many of the Burmese workers would stay in the country illegally anyway.
Posted by CAAI News Media at 10:04 pm

If the Burmese workers (and anyone else) fear for they lives, they would do well in making sure they do what is needed for them to stay legal in Thailand .If they do not, how can they expect a better outcome?
I find it irresponsible and childish, and even immoral, that people come to Thailand, hoping to enjoy a richer life, refuse to do what the laws of Thailand bid them to do, to ensure a legal stay!