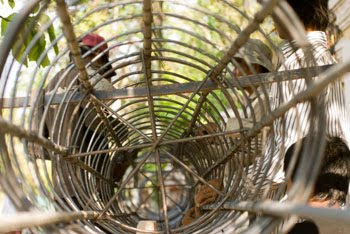 Photo by: RICK VALENZUELA
Construction workers shape steel reinforcment rods for concrete foundation piles Wednesday at a housing building site on Street 294 in Phnom Penh.
--------------------------------------------------------------------------------
We have changed our strategy for sales by offering 25 percent discounts."
--------------------------------------------------------------------------------
via CAAI News Media
Thursday, 04 March 2010 15:02 Soeun Say
Housing firms say discounts and payment plans are crucial to kick-start sales
HOUSING developers are discounting properties and allowing clients to pay by installments to bolster the industry after the economic crisis.
Developers across Cambodia are changing marketing strategies in a bid to sell homes after suffering a dismal year from the last quarter of 2008.
Sok Channa, sales manager of Hong Kong developer Sun Wash Group, which owns Phnom Penh’s Victory City development, said Tuesday that the firm has been forced to introduce new measures to entice would-be buyers who previously had to pay for properties in full.
“We have changed our strategy for sales by offering 25 percent discounts on home prices and allowing clients to pay in installments for a period of up to 10 years.
“This is in order to attract clients from the lower and middle classes ... If we didn’t do this, we would find it very hard to sell properties,” he said.
He added that clients can pay US$1,000 each month for flats at Victory City, which range between $100,000 and $140,000 in price. So far, the company has sold 100 of 250 flats, mostly to Cambodian businesspeople.
Developers at some of Phnom Penh’s best-known sites are also offering new credit and payment plans.
Customers can now pay in three-year installments at the capital’s $600 million Grand Phnom Penh International City and in 10-year installments at $2 billion Camko City.
Socheat Yutharo, marketing manager of Hilton Park Villa, a $40 million luxury property development in Sihanoukville, said that his company’s research shows that housing developers are shifting strategies and offering new payment plans to entice customers in a flat market.
“It is true. We are changing strategies to attract clients to buy homes by offering discounts and three-year installment plans,” he said, adding that his company changed its approach last month.
Kong Vannsophy, general manager of the $1 million Dream Town development in Dangkor District, Phnom Penh, added that his firm is preparing to launch a similar scheme.
Meanwhile, leading banks such as ANZ Royal are re-launching mortgage offers to would-be home owners.
“We have had mortgages for some time, but we pulled back at the start of the financial crisis due to concerns about the direction of the property market. Of course, demand for housing finance also disappeared at that time.
“Now that prices appear to have stabilised, it makes sense to start pushing them [mortgages] again,” wrote ANZ Royal CEO Stephen Higgins in an email.
ANZ holds $200 million in excess liquidity with the central bank, an amount Stephen Higgins told the Post via email last month that he would like to see lowered.
Industry experts also believe that the sector is showing green shoots of recovery.
Kerk Narin, general manager of Bonna Realty Group and the secretary of National Valuers’ Association of Cambodia, said “there are good signs for Cambodia’s property market in 2010 and 2011” despite the continued lack of speculative and investment buying in the market.
ADDITIONAL REPORTING BY STEVE FINCH
Posted by CAAI News Media at 9:11 pm