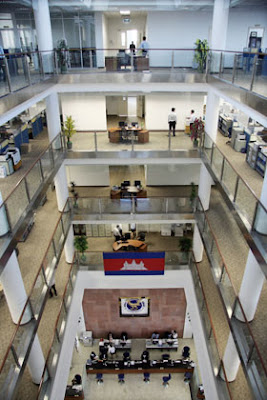 Photo by: Sovan Philong
ACLEDA Bank employees work at their headquarters on Monivong Boulevard, Phnom Penh. ACLEDA was one of 22 firms which applied for a securities licence by this week.
via CAAI News Media
Thursday, 04 March 2010 15:02 Nguon Sovan
Director says application total is higher than required for launch
TWENTY-TWO companies have applied to become licenced on Cambodia’s forthcoming stock exchange, its director general said Wednesday.
Companies had until Monday’s deadline to apply for permission to become securities firms or representatives on the Securities and Exchange Commission of Cambodia (SECC). The stock exchange is set to be launched in May but trading is unlikely to commence until the end of the year at the earliest, according to previous comments by finance officials.
“The number is much more than the number we need. We will now evaluate those companies’ qualifications thoroughly and short-list the companies we will grant licences to,” said Ming Bankosal, SECC’s director general, who declined to disclose the number of permits set to be distributed.
“We hope that at the end of this month, the primary assessment will be done,” he said, adding that banks and new companies are among the applicants.
Svay Hay, vice president and head of the Capital Markets Division at ACLEDA Bank, confirmed that the lender was one of the applicants.
“We are a huge company with branch networks nationwide,” he said. “Overall, we have more than a half of million depositors. They can diversify their investments by entering the stock market. We want to serve our customers, investors and the public in the stock market.”
ACLEDA Bank has recently attracted outside investment from Jardine Matheson and Leopard Capital for undisclosed values thought to be much higher than the book values based on the lender's anticipated future growth and profits.
Project director of Korean exchange, Inpyo Lee, said that it is good news that many private sector companies had shown interest in participating in the future bourse.
“This is a sign that this [stock] market has potential demand,” he wrote in an email Wednesday.
He said that he is sure that the SECC would apply selection criteria rigorously in order to create a strong, efficient and effective stock market.
“I still believe that the [stock] market can be opened as planned if all related parties cooperate well,” he added.
According to the prakas on the licencing of securities firms and securities representatives, firms seeking to operate as securities underwriters must have minimum capital of 40 billion riels (US$9.52 million). Securities dealers need minimum capital of 25 billion riels ($6 million) and brokers require 6 billion riels ($1.42 million).
Investment advisory firms need a minimum of 400 million riels ($96,000), and investment advisory representatives will be required to lodge securities bonds of 20 million riels ($4,800) with the National Bank of Cambodia.
The regulations also stipulate certain requirements for human resources and professional experience.
The Kingdom is scheduled to begin trading in three firms – Telecom Cambodia, Sihanoukville Autonomous Port and Phnom Penh Water Authority – at the end of the year once construction of a four-storey exchange building is completed at Camko City on the outskirts of the capital.
Posted by CAAI News Media at 9:16 pm