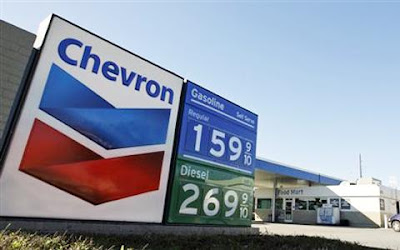 Photo: AP
Eight years after Chevron found crude oil off Cambodia’s coast, the American company has yet to begin full production. In remarks in April, Prime Minister Hun Sen said he wants the oil giant to begin production by 2012 or risk losing its rights.
“There are few that know where petroleum is being explored, what companies have obtained licenses.”
A new survey suggests that many of Cambodia’s smaller business entrepreneurs are not fully aware of the development of the extractive industry.
The survey, initiated by Cambodians for Resource Revenue Transparency and issued Tuesday, found that out of 548 companies, most had little knowledge of the sector and that information was lacking in both the media and the business community.
However, observers say development of these resources, especially in oil and gas, will require good management and will affect many businesses.
“There are few that know where petroleum is being explored, what companies have obtained licenses,” said Neou Seiha, who led a survey for the Economic Institute of Cambodia.
Of the small- and medium-sized enterprises surveyed, about 70 percent said revenue from the extractive industries would help reduce poverty. But many respondents were also worried about corruption and a lack of systems to fight it.
Of those surveyed, 38 percent said the government would be able to manage the industry, compared to 31 percent who disagreed and 31 percent who preferred not to answer.
Cambodia expects to have oil flowing by the end of 2012, with revenues expected to reach $1.7 billion.
The transparency survey found that entrepreneurs want to see good management of revenue to improve infrastructure and to alleviate energy costs and taxes.
Mam Sambath, chairman of Cambodians for Resource Revenue Transparency, said Cambodia could benefit from the extraction of natural resources if they are properly managed.
Critics have warned that Cambodia could succumb to an “oil curse,” where high revenues will not find their way to citizens but will instead fund an economic elite.
Sman Tiet, a lawmaker for the ruling Cambodian People’s Party, told VOA Khmer such a “curse” could result from many factors, but now was not yet the time to discuss them.
Glenn Kendall, an extractive industries adviser for UNDP, said it is still “early days” for Cambodia’s production of oil and gas.
Posted by CAAI News Media at 9:08 am