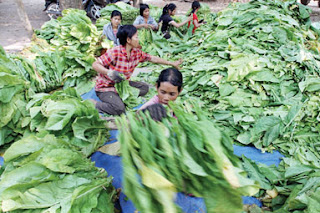 Photo by: Sovan Philong
Workers bundle tobacco leaves together before hanging them up to dry in Kampong Cham province on Saturday.
via CAAI
Wednesday, 16 February 2011 15:01 Jeremy Mullins
Kampong Cham province
British American Tobacco (Cambodia) would like to see a consistent export quota of duty-free tobacco to Vietnam, after its farmers were affected when the system was dropped for much of 2010.
Vietnam agreed to eliminate duties on certain amounts of Cambodia’s tobacco exports in 2007 until 2009. This had allowed Cambodia to send 3,000 tonnes of tobacco annually to Vietnam duty-free.
The agreement was not in forced for much of 2010, Ministry of Commerce director general Sok Sopheak said in September, but was renewed late last year,
A reduction in tariffs means the price of tobacco in Cambodia rises.
Merchants find it more profitable to purchase Kingdom tobacco for resale in its eastern neighbour.
“[The quota] is good for the country, and good for farmers,” said Kun Lim, BAT’s head of corporate and regulatory affairs Kun Lim. But he added that while the company supported the quota system, it would like to see more certainty within it.
“Such quotas were not available in 2010 due to some technical issues, and as such the price of tobacco dipped by more than US$0.50 per kilogramme which resulted in low returns to farmers of around US$453 per hectare,” the firm said in a release issued earlier this year.
In contrast, peak prices nearing $2,000 per hectare were recorded in 2009 due to increased local demand
and the Vietnamese quota programme.
BAT says it makes extensive use of contract farmers, particularly in its Kampong Cham province plantations.
Its use of contract farming requires the company be able to plan ahead for prices for the harvest seasons – a situation Kun Lim said is challenging when the quotas for exports to Vietnam were not reliable.
“If there is not a consistent quota, the problem will come again,” he said. “[BAT] cannot secure a quantity [of tobacco grown] with a floating quota system.”
A key issue for the firm was ensuring the size of quota is negotiated with Vietnam by the start of the growing season, so BAT can negotiate its farming contracts early.
The firm claims to operate contracts based around a 40-percent return on investment for the farmer, with over 900 farmers expected to be contracted for the 2010 to 2011 growing season.
At present, much of the Kingdom’s tobacco cultivation meets domestic demand, while international buyers mainly turn to Cambodia’s crop when their own harvests’ fall short.
“Right now, Cambodia’s crop of tobacco is purely a buffer,” he said.
Although prices can be driven higher by foreign buyers entering the Kingdom, BAT sees between 80 and 90 percent of its contract farmers abide by signed contracts, he said.
BAT has been experimenting with methods to improve yields, such as improved irrigation systems at its Kampong Cham tobacco fields.
Ministry of Commerce officials declined to comment yesterday.
Vietnamese trade advisor to Cambodia Ly Nedien Cuong could not be reached for comment yesterday.
British American Tobacco (Cambodia) company was formed in 1996 as a joint venture with Cambodian businessman Kong Triv.
Posted by CAAI News Media at 11:23 pm