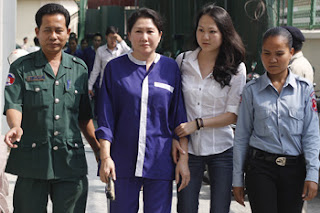 Photo by: Pha Lina
Seng Chenda enters Phnom Penh Municipal Court today.
via CAAI
Tuesday, 15 February 2011 22:25 Buth Reaksmey Kongkea
Seng Chenda, wife of prominent businessman Khaou Chuly, was sentenced to 20 years in prison today by the Phnom Penh Municipal Court for her role in an attempted plot to kill her husband’s daughter from his previous marriage.
Judge Sin Visal said that confessions and testimony given by Seng Chenda’s accomplices proved that she had masterminded a scheme to kill Suv Chantha as well as her daughter in June last year.
Suv Chantha is the daughter of tycoon Khaou Chuly and the wife of Sun Chanthol, vice chairman of the Council for the Development of Cambodia and a former minister of public works and transport.
“According to the answers and confessions of the accomplices during their questioning … in front of police and the investigating judge … they have said that Seng Chenda ordered them to kill Sun Chanthol’s family,” Sin Visal said in court today.
“Therefore, the court decided to sentence her to a 20-year imprisonment.”
The accomplices – Khorn Lak, 30, Chan Sokha, 38, and Neang Sinath, 25 – were also sentenced for their roles in the plot.
Khorn Lak, a security guard employed by Khaou Chuly, received a 20-year sentence.
Chan Sokha, a maid at Khaou Chuly’s house, and Neang Sinath, a maid at Suv Chanthol’s house, were both given sentences of 18 years.
The court ruled that a fourth suspected accomplice, Yin Sophearith, 25, also a security guard employed by Khaou Chuly, was not involved in the plot and released him.
He testified that he had been at home the night of the murder plot, recovering from injuries from a traffic accident.
Seng Chenda and her four suspected accomplices were arrested in June and charged with attempted murder under the Law on Aggravating Circumstances for Felonies, which carries a maximum sentence of life in prison.
All pleaded not guilty to the charges.
Lim Vanna, Seng Chenda’s lawyer, said the court’s verdict was wrong.
“I think that this verdict does not deliver justice to my client because she is innocent and is also a victim.”
Seng Chenda said the verdict was a “mistake”.
“I have not been involved in, nor have I committed this accused crime; but the court has made a mistake about me. I think that the court is very cheap and its verdict is very unjust for me,” she said.
“There is no justice in Cambodia.”
The verdict brought to close a dramatic trial with more than a dozen witnesses and five hearings that saw several accused recount testimony to police and claim they had been forced to confess under threats from police and Sun Chantol.
Chan Sokha and Neang Sinath both said police forced them to meet with Sun Chantol, who they said threatened them and their families.
Khaou Phallaboth, a son of Khaou Chuly, said the charges were merely an extension of a family dispute.
“I don’t believe that Seng Chenda has committed this crime, it is just a drama prepared by Sun Chantol.”
Posted by CAAI News Media at 8:34 am