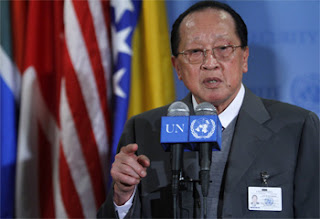 Photo by: Reuters
Foreign Minister Hor Namhong speaks to reporters during a press briefing following a meeting of the UN Security Council in New York on Monday.
via CAAI
Tuesday, 15 February 2011 18:53 Cheang Sokha
The United Nations Security Council voiced “grave concern” on Monday about the recent border clashes between Cambodia and Thailand, but said the issue should be dealt with at the bilateral and regional levels.
Cambodia had asked the council to order the deployment of UN observers to the border in order to halt Thailand’s “war of aggression” against Cambodia.
But the 15-nation body made clear in a statement its role would be limited to supporting “bilateral efforts and regional efforts” to negotiate an end to the conflict.
At least 10 people were killed during four days of clashes earlier this month in disputed areas close to Preah Vihear temple.
At least 34 Thais and 55 Cambodians were wounded, according to the two sides. Tensions first erupted in July 2008, when Preah Vihear was listed as a UNESCO World Heritage site over Thai objections.
During the closed-door meeting, council members were briefed on the border situation by UN Undersecretary General B Lynn Pascoe and by Indonesian Foreign Minister Mary Natalegawa. Cambodian Foreign Minister Hor Namhong also addressed the chamber along with his Thai counterpart Kasit Piromya.
In a statement following the meeting, Maria Luiza Ribeiro Viotti, Brazil’s ambassador to the UN and current UNSC president, said council members urged both sides to “display maximum restraint and avoid any action that may aggravate the situation”, while continuing to cooperate with ASEAN mediators to resolve the dispute peacefully.
“The members of the Security Council further urged the parties to establish a permanent ceasefire and to implement it fully and resolve the situation peacefully and through effective dialogue,” the statement added.
During his address to the council, Hor Namhong decried Thailand’s “war of aggression” against Cambodia and called for an international solution to the stand-off.
He repeated earlier allegations that Thai forces deployed cluster munitions during the skirmishes, in addition to a range of conventional artillery that fell up to 20 kilometres inside Cambodian territory.
He said six Cambodians were killed and 71 injured in the clashes, adding that two of the dead fell victim to a cluster munition blast, which also injured eight people.
“Even though there were two de facto agreements on a ceasefire, the current situation, however, remains extremely fragile. Fresh fighting may breakout again at any time without forewarning, while heavily armed Thai soldiers, artilleries and tanks have been positioned along the border, posing constant pressure on Cambodia,” Hor Namhong said in his speech to the UNSC.
He said Cambodia supported a “peaceful solution” to the conflict via ASEAN mediation or, failing that, a deployment of UN observers to the area.
In a press briefing following the meeting he said it was regretful that the UNSC would not send observers to guarantee a permanent ceasefire.
Thai Prime Minister Abhisit Vejjajiva said today that the outcome of the UNSC meeting meant Cambodia would not be able to avoid bilateral talks.
“It shows that the international community wants both sides to use bilateral talks to end the conflict,” Thai state media quoted Abhisit as saying.
“Therefore Cambodia has no reason to reject [the talks]. We should return to the talks.”
The ceasefire reportedly got off to a shaky start, however, with Thai army officials claiming one of their soldiers was injured in clashes before dawn today. Cambodian officials denied the report.
“It was a minor clash at the frontline with pistols, wounding one soldier on the Thai side,” said Thai army spokesman Sansern Kaewkamnerd, adding that the soldier was wounded by a grenade.
A spokesman at a Thai hospital in the border area said the wounded soldier appeared to have stepped on a landmine.
The Cambodian government, however, said it was unaware of any clash between the two countries.
One Cambodian soldier based close to Preah Vihear said there had been no fighting.
“I’m staying here 24 hours [a day] but there is no fighting,” said the soldier, who gave his name only as Chamroeun.
“Only Thai soldiers are throwing grenades and Cambodian soldiers do not respond.”
He said the Thai soldier may have been injured by one of his own grenades.
ASEAN foreign ministers are set to address the conflict during a meeting in Jakarta next Tuesday.
Hor Namhong is set to return to Cambodia tomorrow.
ADDITIONAL REPORTING BY REUTERS
Posted by CAAI News Media at 8:26 am